When I was in my 20s and a newbie at investing, a veteran of the financial industry gave me simple but sound advice when I asked about timing stock purchases.  He said “Well, I can’t advise you on a particular stock as I didn’t research it. However, if you buy any stock in December and sell in January, you will make money “.  He further explained “The markets tend to quiet down during the holidays, and in January when people go back to work, they tend to be optimistic about the future and thus the market goes up”. 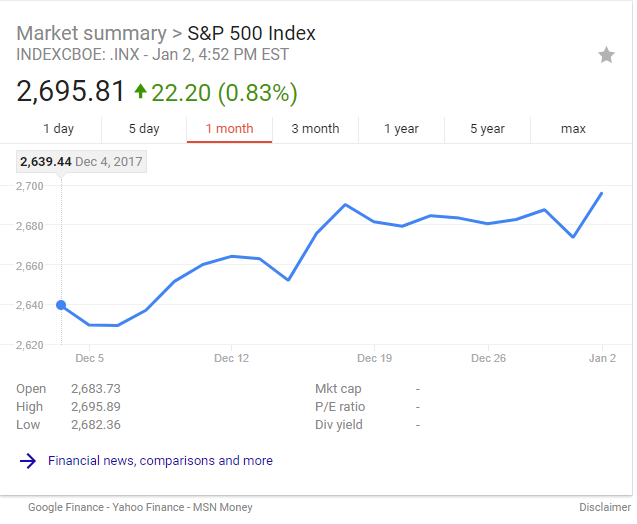 A quick Google on the monthly S&P chart confirms this little truism. And yes, I know you may be conjuring up a counter argument in your head; the whole year of 2017 has been an uptrend in the markets, hence January would be a better time to buy than December. So I invite you to check other years and see if this truism works.
My point is not to give you over-simplified advice, but rather to draw your attention to New Year’s and the optimism it brings to us. Despite the fact that the calendar is man-made (even if time is not), we humans like to associate the New Year with new beginnings.

Has it occurred to you that the greeting is always to wish others a “Happy New Year”, not a “normal” new year?

Yes, I like New Year’s because it gives me an opportunity to reflect on last year, and to look forward to the year ahead. It is as if there’s a cold wind from Chicago, blowing through the year, sweeping all the dust away, allowing me to start with a fresh, clean slate.

During New Year’s, I also keep my habit of making New Year’s resolutions; this year, I taught my kids how to do so. My six year daughter was delighted to discover about resolutions and very quickly made a few, including doing more homework and spending more time with mom.

Once, I was showing a colleague of mine my New Year’s resolutions and she replied quickly “Oh I never make them because I don’t want to be disappointed when I don’t fulfill my goals”.

At first, I thought she was brilliant. But I quickly realized it was a very sad way to live your life. To have no expectations for the New Year so that you won’t be disappointed in yourself. I thought about it more, on the motivation of her not doing this, not wanting something better for herself. And I realized that it was the fear of failing. The reason why most of us don’t set expectations (or allow ourselves to dream) is because of fear. So what can we say about fear?

Tim Ferris, the self-help guru, gave a TED talk recently about fear setting. He talked about the philosophy of stoicism that he has embraced recently, where instead of goal setting, he does fear setting. In his method, he first thinks about what he wants to do that he is afraid of doing. Then he writes down as many potential worse-case scenarios that could happen. Next, he writes what things he could do to prevent each one of the worst-case scenarios. In a third column, he writes down a REPAIR-list, comprising things to do if a worst-case happens.  I tried this exercise and found it gave me a lot of insight to my primal fears that, in the past, caused my overall inaction.

I also quickly realized, beyond all this goal setting and the science of goal setting, the one thing that a person needs more in facing fear and making goals is courage. Courage is required to look without sympathy, with intense objectivity of our own failings and how we have disappointed even ourselves; it is courage to cast a vision on our lives even when our current life seems bleak and unreal. Courage is needed to go beyond expectations, to wish for something more out of our life. Courage is the willingness to accept our surroundings and the people who have failed us, and also to acknowledge our part in the broken relationships.  Courage is swimming against the tide.

When Terry Cruz, an actor and former NFL player, was asked by Tim Ferris “if you had a gigantic billboard anywhere with anything on it, what would it say and why?”
“God will not have his work manifest by cowards.” Ralph Waldo Emerson.

Terry uses this quote to remind himself on a daily basis of how to defeat fear and to once again learn that every great and extraordinary accomplishment in this world is done through courage. He further explains that the more you run from your fears, the bigger they get; but the more you go into them, the more they tend to vanish like a mirage.

I don’t know about you, but I am wishing to build my courage muscle this year. I am wishing the same for my kids.
May 2018 be a year of courage for you.

The Market Corner: The Month in Review "It’s cold outside!"

Cboe: A Look at the First Three Weeks of Cboe Bitcoin Futures Trading