Back in 2008, as the financial world was falling apart, the business media loved to quote Warren Buffett’s comment about derivatives from Berkshire Hathaway’s 2002 annual letter. However, that line has been taken completely out of context to fit the needs of market commentators or derivative critics. The specific line appears below –

“In our view, however, derivatives are financial weapons of mass destruction, carrying dangers that, while now latent, are potentially lethal”

The same letter contained the next quote, which may be a startling one to many readers.

That’s right, Warren Buffett is a big user of those weapons of mass destruction. The full story is much too long to put in this space, but the short version is Buffett’s comments about derivatives stemmed from Berkshire Hathaway inheriting positions through the purchase of General Re®. They had a book of derivative positions that had come along with the acquisition and his comments were a reflection on an inability to properly determine the value of many positions or the strength of the counterparty for each position. Both of these issues are unique to Over The Counter (OTC) derivatives and not the listed market. For example, if you buy an option that trades at one of the Cboe option exchanges you can find the value by using a quote machine and the counter party risk component is well managed by The Options Clearing Corporation (OCC).

So how does Berkshire Hathaway use the derivatives market?  It turns out that just a couple of years after the worn-out quote from above showed up in Warren Buffett’s annual letter Berkshire Hathaway started selling put options on four broad based equity indexes (S&P 500, FTSE 100, EuroStoxx 50 and Nikkei 225). From 2004 – 2007 (note the bad timing of these trades, although they look good now) $4.5 billion in premiums were received for long dated put options that expire between 2018 and 2027.   Buffett notes that premiums were paid up front and that this effectively negates the counter party risk associated with an OTC derivative trade, at least on his side of the trade. This chart shows each broad-based index mentioned as the underlying on these trades. To have an apples to apples comparison each index is adjusted to a price of 100 on December 31, 2003 through the end of 2017. 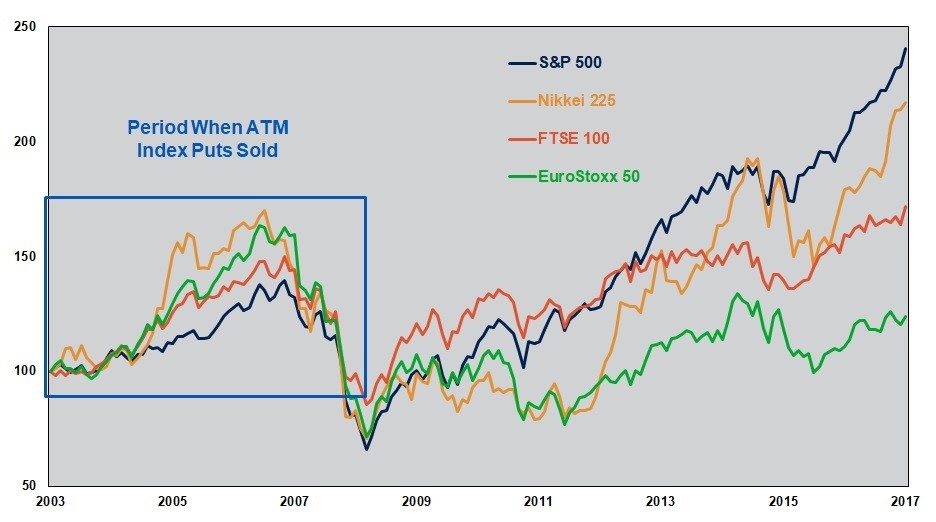 Because these are over the counter trades we don’t have a full picture.  But here is what we do know.  We know the premiums received and also the four indexes that are the underlying markets for the short put positions.  We also know that in 2010 some of the positions were closed out and a $222 million profit was booked.  The remaining open contracts represents about $4.2 billion of premiums received.  We also know these are European style contracts which means the holders cannot choose to exercise early.  In the case where some contracts were closed out early, it is noted in a filing that Berkshire agreed to close the trades out at the request of the holder of the position.

As a side note the fair value of the options is determined using a Black Scholes calculation.  The implied volatility assumption for these positions was a weighted average of 17.4% which I find pretty reasonable considering the all time low average for VIX in 2017.  I also found it interesting that the volatility input was dropped from 20% as of the end of 2016.

Finally, one other thing we do know, in June 2018 these contracts start to expire.  I’ve been focused on this trade for years and can’t wait for the contracts to be retired and profits (or losses) booked.  Once they are closed out I hope to back into these trades or even better hope company filings are a bit more forthcoming about the Buffet Put Trades.  If not, I may have to camp out in Omaha to get some answers.