SGX FX Futures volume rises above US$93 billion in July amid surge in USD/CNH trading; year-on-year growth climbs to 173%

Rising concerns that protracted trade tensions between China and the US may evolve into a full-fledged currency war kept the market on tenterhooks in July. While emerging markets are typically more volatile, the threat of a spillover of trade issues has the potential to upset most economies. The growing trade war rhetoric has only served to accentuate how convergence of geopolitical concerns and country-specific issues can damage fragile recoveries in the global economy.

China ranks top among trading partners for many countries. Consequently, any imposition of trade tariffs on the Asian nation can impact other economies. There has already been some spillover to FX markets, with the renminbi weakening in July and extending losses in other Asian EM currencies. The rupee dropped to historical lows against the greenback in July and remained weak, falling about 3 paisa m-o-m. However, the Indian currency traded within a narrow range during the month as weakness in crude oil prices provided some respite while volatility abated. 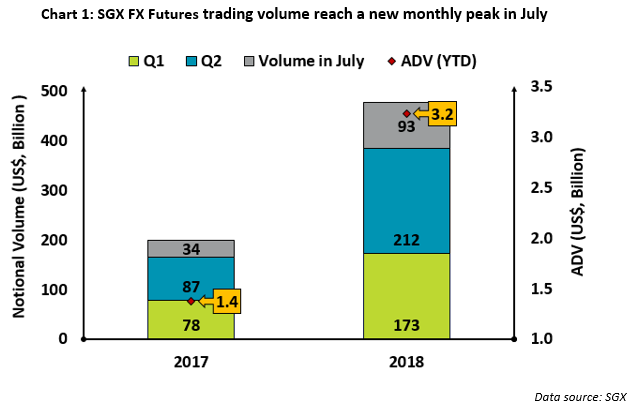 Having started 2018 at about 6.53 against the dollar, the renminbi strengthened early in the year and reached around 6.30 by the end of March. However, the public sparring with the US over trade had shaved 6.5% from the renminbi since mid-June. Official PMI data also pointed to a softer economic environment. The Chinese regulators have previously been keen to deleverage the economy to avoid overheating, the combined effect of this policy along with sluggish credit growth began to show, contributing to a 3 percent m-o-m decline in the renminbi in July.

While resurgent dollar strength applied downward pressure on most emerging market currencies, the potential impact of trade issues between the US and China further impacted the renminbi. Volatility for 1-month options on USD/CNH rose above 7% from about 4% a month ago. The resultant increase in demand for hedging has had a positive impact on SGX USD/CNH Futures, as trading crossed US$61 billion in July. 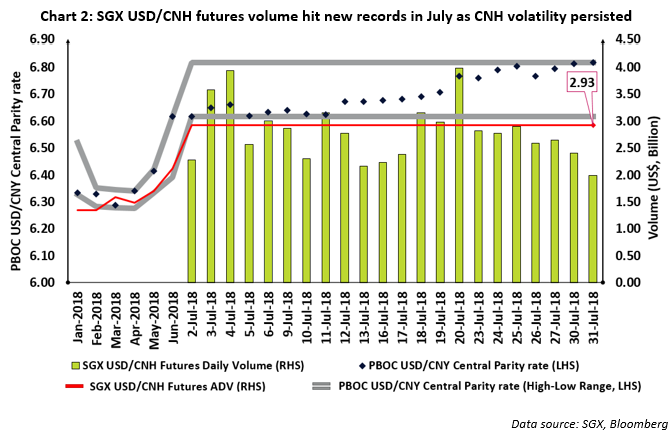 SGX USD/CNH Futures trading crossed US$2 billion for 30 continuous days between 19 June and 30 July. Average Daily Volume (ADV) climbed to US$2.93 billion in July, from US$2.12 billion in June. This included six days of trading above US$3 billion, confirming the deep liquidity at SGX as the world's largest exchange for USD/CNH futures. With US$61.5 billion traded in July, volume was up 45% m-o-m. This also reflects a 308% jump y-o-y over the volume in July 2017 (US$15.1 billion).

SGX USD/CNH Futures trading have been in excess of US$255 billion since the start of 2018. In July, volume was almost a third (32%) of the full-year tally for 2017, with nearly 40% of the trading done after Asian hours. This reflected the growing stature of the renminbi to global FX markets as the internationalisation of the Chinese currency gains pace. It also endorses SGX's strengths in providing a liquid venue for market participants worldwide to hedge risks amid a volatile environment. 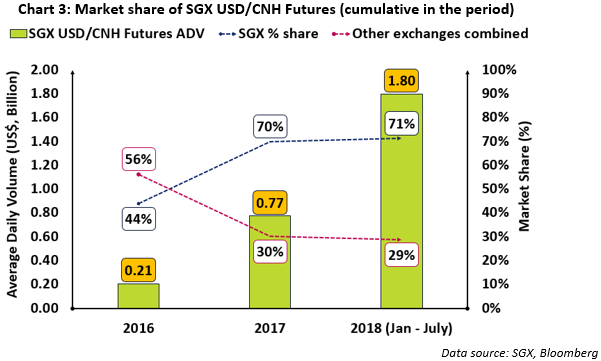 In July, the crude oil futures curve flattened and prices dropped, reducing the stress on the Indian rupee, which remained weak albeit with less volatility. India's political opposition introduced a no-confidence motion in Parliament, but this failed to jolt the currency. July remained largely devoid of market-moving headlines and the rupee moved sideways, trading in a narrow range and ultimately weakening by about 3 paisa in the month.

The implied volatility on rupee options with 1-month expiries fell nearly 100 bp from highs in June. The low-volatility environment in July had an impact on trading volumes across all exchanges compared with the previous month. With the rupee having reached historical lows in recent times, the central bank actions seemed to have aided its recovery. While India's foreign currency reserves have reportedly shrunk in attempts to shore up the currency, Open Market Operations have also provided liquidity to the markets.

As a result, bond yields stayed below the key 8% threshold that had looked vulnerable earlier in the year. Bloomberg reported on 31 July that the Indian government is likely to seek approval to spend an additional 117 billion rupees in the financial year through March 2019. This could apply additional pressure on the currency in the run-up to general elections, given proposed policy expenses in the expansionary budget this year and projected shortfalls in revenue. 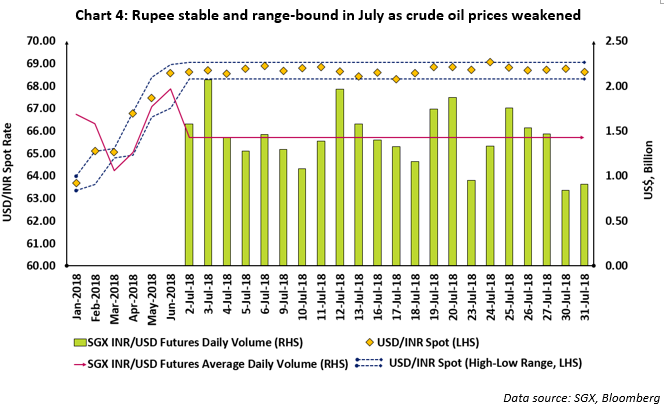 The rupee has depreciated over 7% since the start of the year, fueling demand for hedging. As a result, trading volumes for rupee futures across exchanges have been high in recent months. However, in July, with rupee volatility abating in response to lower oil prices, volumes across exchanges both onshore and offshore have shrunk in response. SGX INR/USD Futures trading exceeded 1 million contracts for three consecutive months, including 1.07 million contracts (US$31.4 billion) in July. This represented a gain of 81% y-o-y and a 23% decrease m-o-m. 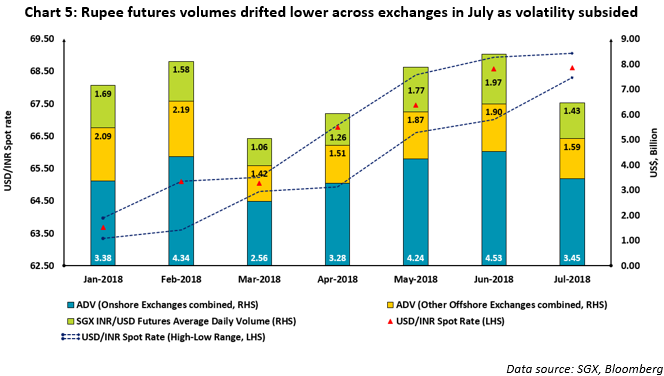 In a reversal of fortunes for the Indian capital markets, foreign investors pumped in approximately US$330 million in July, ending three continuous months of net withdrawals. The equity markets resumed a recovery; key indices hit new peaks and foreign investors were net buyers. India's fixed income markets, battered in recent months by a worsening fiscal outlook, rising inflation and a central bank with hawkish view on rates, also saw positive net flows in July - the first time since January. Analysts at major sell-side institutions have started voicing a positive outlook in a belief that Indian fixed income market could recover. 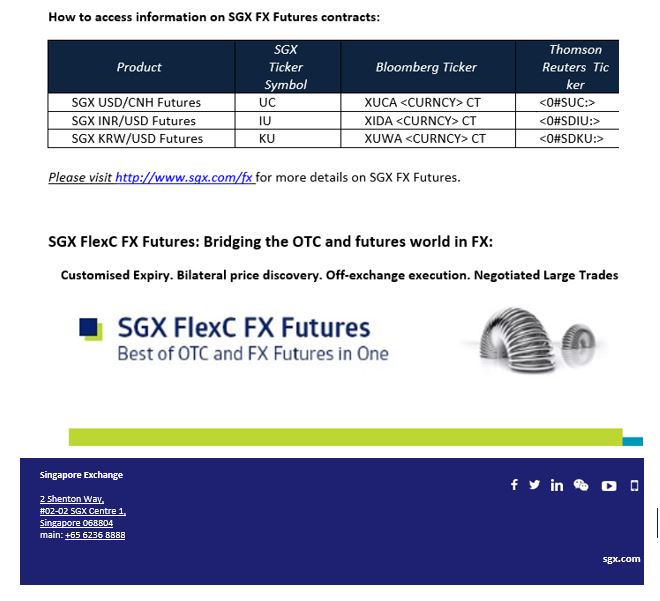 This document/material is not intended for distribution to, or for use by or to be acted on by any person or entity located in any jurisdiction where such distribution, use or action would be contrary to applicable laws or regulations or would subject Singapore Exchange Limited ("SGX") to any registration or licensing requirement. This document/material is not an offer or solicitation to buy or sell, nor financial advice or recommendation for any investment product. This document/material is for general circulation only. It does not address the specific investment objectives, financial situation or particular needs of any person. Advice should be sought from a financial adviser regarding the suitability of any investment product before investing or adopting any investment strategies. Use of and/or reliance on this document is entirely at the reader's own risk. Further information on this investment product may be obtained from www.sgx.com. Investment products are subject to significant investment risks, including the possible loss of the principal amount invested. Past performance of investment products is not indicative of their future performance. Examples provided are for illustrative purposes only. While each of SGX and its affiliates (collectively, the "SGX Group Companies") have taken reasonable care to ensure the accuracy and completeness of the information provided, each of the SGX Group Companies disclaims any and all guarantees, representations and warranties, expressed or implied, in relation to this document and shall not be responsible or liable (whether under contract, tort (including negligence) or otherwise) for any loss or damage of any kind (whether direct, indirect or consequential losses or other economic loss of any kind, including without limitation loss of profit, loss of reputation and loss of opportunity) suffered or incurred by any person due to any omission, error, inaccuracy, incompleteness, or otherwise, any reliance on such information, or arising from and/or in connection with this document. The information in this document may have been obtained via third party sources and which have not been independently verified by any SGX Group Company. No SGX Group Company endorses or shall be liable for the content of information provided by third parties. The SGX Group Companies may deal in investment products in the usual course of their business, and may be on the opposite side of any trades. SGX is an exempt financial adviser under the Financial Advisers Act (Cap. 110) of Singapore. The information in this document is subject to change without notice. This document shall not be reproduced, republished, uploaded, linked, posted, transmitted, adapted, copied, translated, modified, edited or otherwise displayed or distributed in any manner without SGX's prior written consent. Please note that the general disclaimers and jurisdiction specific disclaimers found on SGX's website at http://wwwsgx.com/wps/portal/sgxweb/footerLinks/tos#panelhead21 are also incorporated into and applicable to this document/material.

What Does Learning Mean To You?, by Lynette Lim