SGX FX Futures ended H1 2018 on a record high with over 1.84 million contracts in June

Political events moved financial markets yet again in June. The G7 summit in Canada at the start of June was a fractious event, where the president of the US Donald Trump, openly disagreed with their traditional US allies and ultimately withdrew the US signatures on the joint communique. Immediately thereafter, the much-awaited meeting between the leaders of the US and North Korea finally took place in Singapore. Towards the end of the month, markets were rattled over renewed fears of a trade war between China and the US.

Canada and the EU, traditional US allies, as well as India and Mexico announced retaliatory tariff measures on their imports from the US. However, China remained in the crosshair of the US policy as the US threatened to impose further tariffs on up to US$ 200 billion of Chinese goods. China threatened to impose sanctions of its own in response while advocating collaboration and open discussions.

The trade issue is unlikely to go away any time soon as the impact on emerging market currencies showed. The renminbi weakened by more than 3% m-o-m and hit lows not seen in 2018, while the rupee hit historical lows and depreciated by more than 2% in the month before staging a partial recovery on RBI intervention. SGX FX futures gained from this turmoil as they registered strong trading interest in the month. The aggregate volume for SGX FX Futures set a record of over 1.84 million contracts [up 158% y-o-y] or US$ 84 billion [up 152% y-o-y] in the month. The YTD (Jan to June 2018) cumulative volume of FX futures [US$ 385 billion] was up 132% over the same period in 2017. 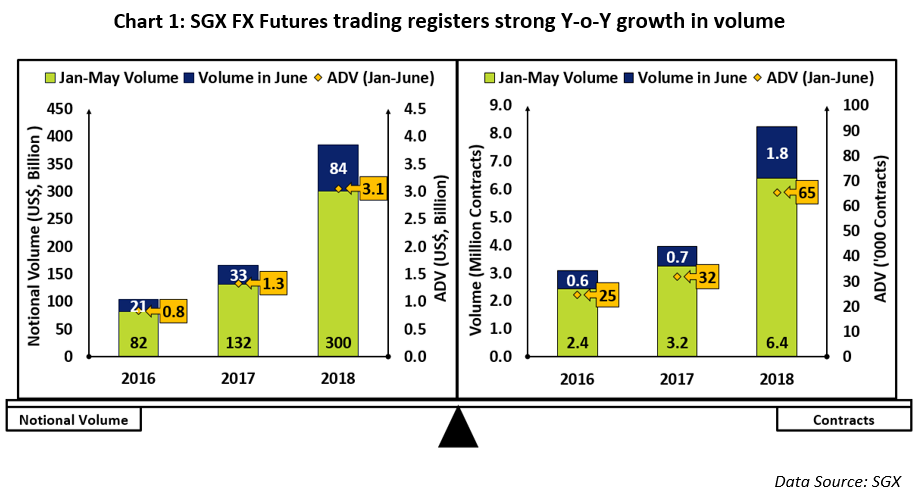 A potential trade war between two of the world's largest economies dominated the conversation in June. The risks manifested in the second half of June as the renminbi depreciated quite rapidly, ending the month down by more than 3% in the month and broke past lows not seen in 2018.

On June 15, SGX USD/CNH futures traded in excess of US$ 2.3 billion, as the markets headed into a long weekend with following Monday (18 June) being a holiday in China and HK. On 18 June, the US announced a second round of tariffs targeting nearly US$ 200 billion of Chinese goods. Asian markets rattled by the move opened the next morning in a "risk off" mode with most Asian equity markets in red. The impact of the overnight news on the renminbi trading on 19 June was higher since it was coming off a long weekend. The day saw bearish undertones in renminbi trading as the market looked to hedge the associated risks. SGX USD/CNH futures traded above US$ 2 billion in a single trading session that day for the second time since launch. 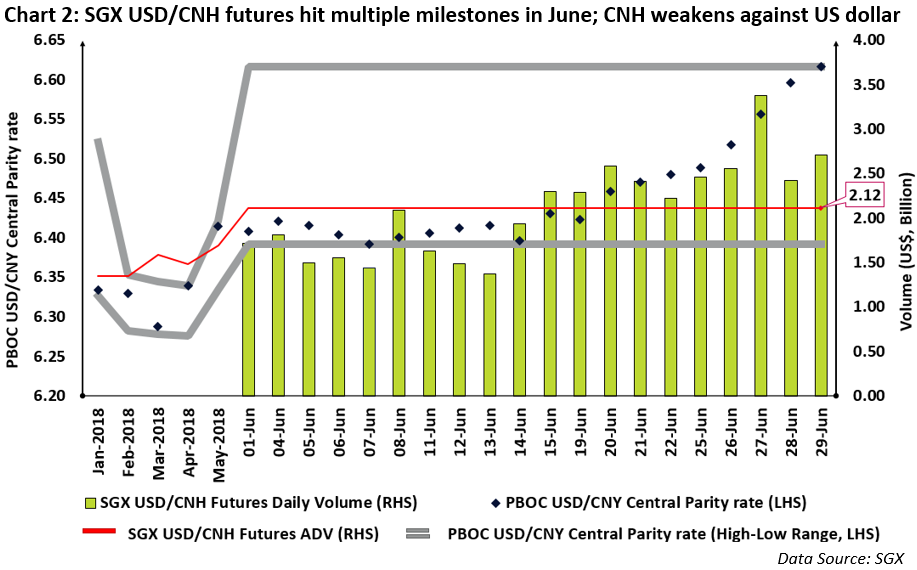 While the holiday on 18 June broke the record stretch of 33 continuous days with trading in excess of US$ 1 billion that began on 2 May, it failed to put brakes on the momentum. As soon as the Asian markets resumed after the break, SGX USD/CNH futures set yet another record by trading in excess of US$ 2 billion on each of the next 9 successive days (the run remains unbroken at the end of month). The feverish trading in renminbi saw yet another jump in the last week of June as both China and US continued to threaten each other and China's central bank reduced the reserve requirements for its banks, releasing US$ 108 billion in liquidity. On 27 June, SGX USD/CNH futures crossed US$ 3 billion for the first time [US$ 3.38 billion], obliterating the previous high [US$ 2.65 billion] by more than US$ 700 million.

The average daily volume for June closed above US$ 2 billion for the first time. In comparison, the ADV at the end of June 2017 was just over US$ 740 million. The total volume for the SGX USD/CNH futures in June was US$ 42.3 billion, up 160% y-o-y. With nearly US$ 194 billion traded in the first 6 months, the volume in 2018 has already exceeded the full calendar year volume in 2017. Over the last few months, the renminbi has been volatile in the US trading hours with the news headlines usually breaking after Asian hours. Market participants have been able to turn to SGX to access the enhanced liquidity even after Asian hours, highlighting SGX's status as a venue of choice to hedge the market risk associated with the renminbi.

Most emerging market currencies have lost ground in the last few months but the rupee is amongst the hardest hit. Due to a confluence of factors such as oil and rising US interest rates that have contributed to a weakening fiscal condition in recent months, the rupee hit historical lows in June before staging a partial recovery reportedly after an intervention from the central bank. The rupee has depreciated by 7.2% in 2018, compared to a 4% appreciation in 2017.

A Bloomberg analysis reported an exodus of foreign investors from most emerging markets in Asia at a pace not seen since 2008. India has not been an exception as the global macro environment has had an adverse impact on the direction of foreign portfolio flows. In 2017, fund managers pumped more than US$ 30 billion in Indian capital markets. Nearly 75% of it was in Indian fixed income securities (with the remaining in equity) as emerging market fund managers chased higher yields. However, the past few months may have tempered the enthusiasm as rising USD interest rates in response to inflationary pressures and a volatile currency have wreaked havoc on the exposure. The Indian fixed income market has already seen withdrawals in over US$ 6.1 billion in 2018. While the key benchmark equity indices are still positive for the year, Indian equities have seen a reversal in fortunes in the last 2 months with net flow for the year turning negative by more than US$ 850 million. The cumulative withdrawals from the Indian capital markets has reached almost US$ 7 billion in the year.

Early in the month, the rupee plunged following the sudden uptick in the crude oil prices as concerns of Venezuelan supply shortage mounted. On 8 June, trading in SGX INR/USD futures contract notched up more than US$ 2.5 billion in response to rupee weakness as participants rushed to hedge their exposures. After a relatively quiet first week, the rupee depreciated through the rest of the month as troubles on the fiscal front continued to mount and the broader bearish sentiments surrounding emerging markets continued to be a drag on markets. 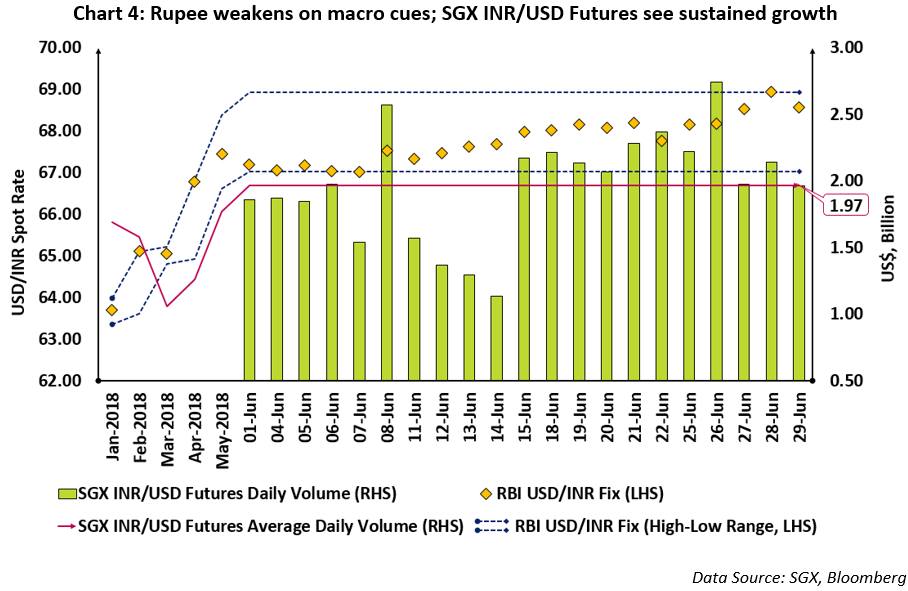 Trading in rupee futures has found an extra gear as a byproduct of the resultant volatility in the market. The trading volume for the SGX INR/USD futures in June crossed 1.4 million contracts [US$ 41.3 billion] for the first time, beating the record set in the previous month by 6%. The volume in June was up 159% y-o-y and the cumulative volume in 2018 [6,199,591 contracts] was up 91% over the corresponding period in 2017 [3,252,780 contracts]. The domestic market's need to hedge their exposure to rupee meant that the market turmoil has also pushed trading volumes on the onshore exchanges higher. As a result, the average daily volumes on the local exchanges were higher than previous months this year. 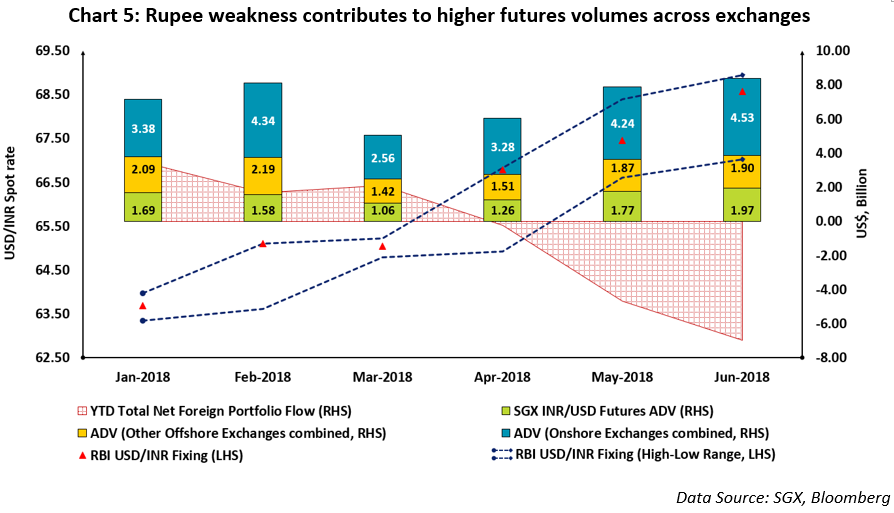 The verbal jousting between the US and North Korea earlier in the year threatened to engulf the region into a conflict. Since then, the events seem to have brought it away from a full-fledged war to a first ever summit between leaders of the US and North Korea in Singapore. However, the talk of trade war between the US and China has seemingly dragged the region into yet another conflict. Korean Won depreciated in the second half of June as the correlation of its moves with renminbi increased. SGX KRW/USD futures saw active trading in June with 16,609 contracts traded in the month, the best month since launch, and open interest has grown 775% y-o-y. 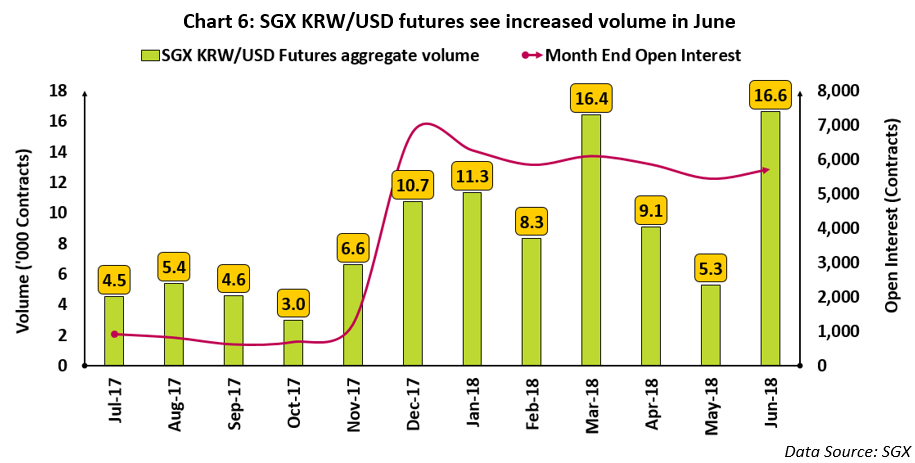 This document/material is not intended for distribution to, or for use by or to be acted on by any person or entity located in any jurisdiction where such distribution, use or action would be contrary to applicable laws or regulations or would subject Singapore Exchange Limited ("SGX") to any registration or licensing requirement. This document/material is not an offer or solicitation to buy or sell, nor financial advice or recommendation for any investment product. This document/material is for general circulation only. It does not address the specific investment objectives, financial situation or particular needs of any person. Advice should be sought from a financial adviser regarding the suitability of any investment product before investing or adopting any investment strategies. Use of and/or reliance on this document is entirely at the reader's own risk. Further information on this investment product may be obtained from www.sgx.com. Investment products are subject to significant investment risks, including the possible loss of the principal amount invested. Past performance of investment products is not indicative of their future performance. Examples provided are for illustrative purposes only. While each of SGX and its affiliates (collectively, the "SGX Group Companies") have taken reasonable care to ensure the accuracy and completeness of the information provided, each of the SGX Group Companies disclaims any and all guarantees, representations and warranties, expressed or implied, in relation to this document and shall not be responsible or liable (whether under contract, tort (including negligence) or otherwise) for any loss or damage of any kind (whether direct, indirect or consequential losses or other economic loss of any kind, including without limitation loss of profit, loss of reputation and loss of opportunity) suffered or incurred by any person due to any omission, error, inaccuracy, incompleteness, or otherwise, any reliance on such information, or arising from and/or in connection with this document. The information in this document may have been obtained via third party sources and which have not been independently verified by any SGX Group Company. No SGX Group Company endorses or shall be liable for the content of information provided by third parties. The SGX Group Companies may deal in investment products in the usual course of their business, and may be on the opposite side of any trades. SGX is an exempt financial adviser under the Financial Advisers Act (Cap. 110) of Singapore. The information in this document is subject to change without notice. This document shall not be reproduced, republished, uploaded, linked, posted, transmitted, adapted, copied, translated, modified, edited or otherwise displayed or distributed in any manner without SGX's prior written consent. Please note that the general disclaimers and jurisdiction specific disclaimers found on SGX's website at http://www.sgx.com/wps/portal/sgxweb/footerLinks/tos#panelhead21 are also incorporated into and applicable to this document/material.

Letter from the Co-CEO, Lynette Lim "The future of human beings"