Global politics had a significant impact on the first half of 2019. In Indonesia and India, the incumbent governments returned to power with sizeable mandates. Across Europe, leadership battles continued to make headlines, with Europe struggling to agree on bloc leadership and Tory candidates in the UK fighting to take on the UK Prime Minister post. The US-China trade issues remained unresolved with new tariffs kicking in along with restricted access to US technology for many Chinese firms. This is likely to continue to cause anxiety to both countries' trading partners.

Iran remains a central figure in Middle-East conflicts where the situation has turned increasingly volatile and oil prices are now incorporating the fallout from a deteriorating US-Iran relationship.  At the heart of this issue is Iran's nuclear program and the European allies of the US have publicly been resentful of Washington's unilateral withdrawal from the deal jointly signed by many countries to keep a check on Iran's nuclear program. The US's withdrawal of waivers to sanctions imposed on importing oil from Iran has affected trading partners like India that import the bulk of its oil from Iran. Attempts in Europe to create an alternative new payment system not denominated in USD aims to avoid US sanctions on large European companies. While it is too early to assess the impact of such a system, the attempt in itself reflects a growing chasm between the US and its European allies. Tensions escalated further after allegations that Iran was behind an attack on oil tankers in the region, which led to several allegations, denials and reactions between Iran and the US.

The G-20 Summit in Osaka closed off the first half of 2019, the first time any G-20 summit has convened in Japan. Expectations of any significant developments stayed low prior to the summit and scepticism remained even after signs of a truce between the US and China. It seems global markets are waiting for signs of tangible progress before reacting.

Brief bouts of volatility during 2019 contributed to strong activity for the SGX FX Futures. With the US-China trade relationship impacting volatility in the market, trading activity has risen in the first half of this year. The aggregate trading volume for SGX FX Futures in June was nearly US$ 122 billion (2 million contracts). This took the total transacted volume in 1H 2019 to US$ 610 billion (up 15% from the preceding six months) and included US$320 billion in 2Q 2019 (up 10% over preceding quarter).

In June, the aggregate open interest for SGX FX Futures also set a new record. For the first time since the introduction of FX Futures in late 2013, the aggregate open interest crossed US$ 9 billion and ended June above US$ 8.4 billion (146,762 contracts), more than double that of the US$ 4.1 billion (71,095 contracts) at the end of December 2018.

The fractious US-China trade talks continued to dominate the news cycle in June. While tensions escalated in May, talks remained unresolved throughout June with both sides unwilling to compromise.

The daily range for PBOC USD/CNY midpoint parity rate had been very narrow since mid-May. With no clear outcome on the trade talks, the renminbi hovered around 6.89 against the dollar as the market awaited guidance to break out in any direction. At the start of June, expectations of a meeting between Xi and Trump were low, given public threats of additional US sanctions if China did not agree to a meeting at the G-20 summit. That changed in the third week of the month with reports emerging of a phone call between the two leaders and a possible meeting in Osaka - leading to immediate gains in the currency. SGX USD/CNH Futures traded a combined volume of US$ 12 billion on 20 and 21 June.

Rising tensions between the US and China led to a sharp depreciation in the renminbi in May. This has had a strong impact on the SGX USD/CNH futures trading with market participants trying to assess economic fallout of the situation. Uncertainty in the markets surfaced in currency trading, with the average daily trading volume for SGX USD/CNH Futures totalling US$ 4.75 billion in June. This was powered by eight days of trading above US$ 5 billion. Since the start of 2019, trading in SGX USD/CNH futures has exceeded US$ 1 billion on 125 days, which includes 101 consecutive days as on 28 June. Liquidity deepened with active interest in the overnight trading session, well outside the traditional Asian trading hours, as indicated by the near 38% executed in the T+1 session this year. 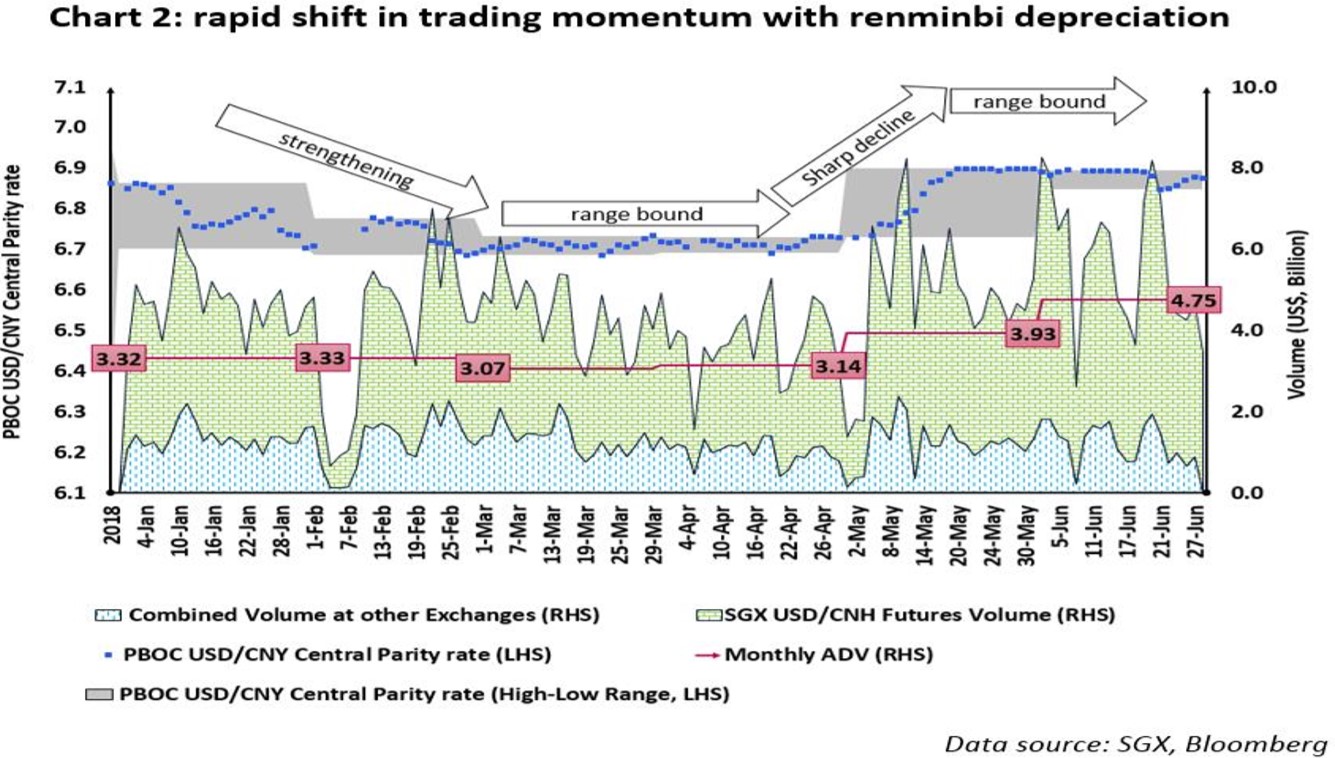 The total trading volume in June was in excess of US$ 90 billion (903,350 contracts), while the cumulative volume in 2019 has already surpassed US$ 426 billion. In comparison, the trading volume for the entire 2018 was US$ 534 billion. Open interest continued to grow, as more people hedged their exposure. In June, the open interest for the SGX USD/CNH futures crossed US$ 7 billion for the first time (on 12 June) before ending the month at US$ 5.9 billion (59,235 contracts). 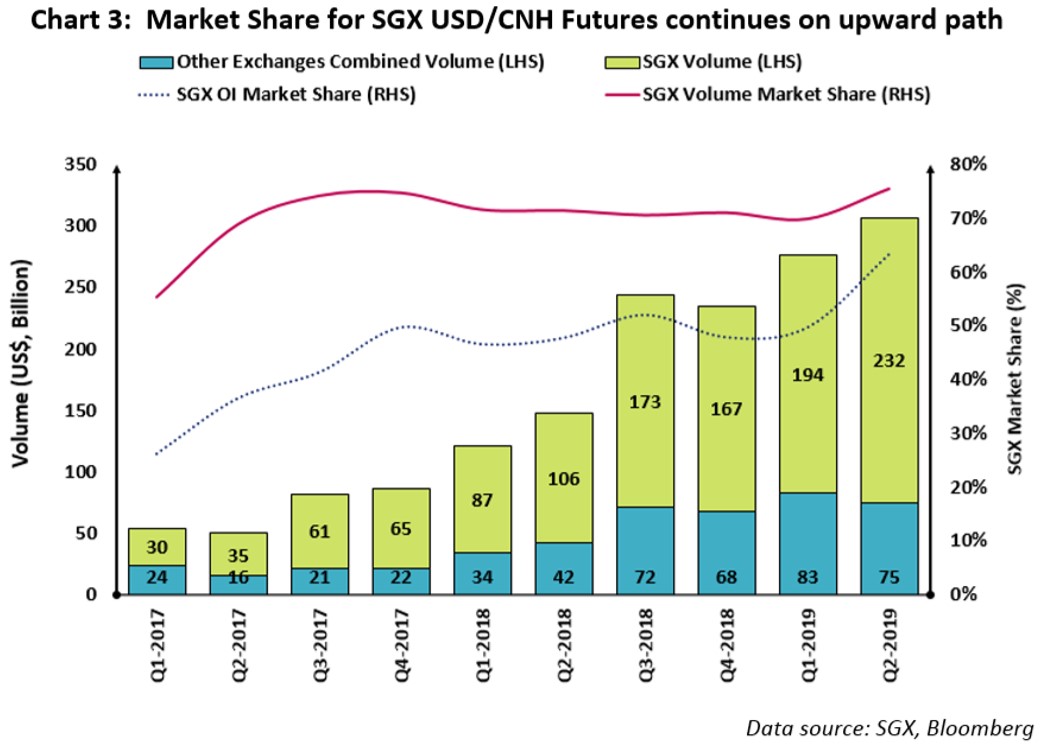 After the euphoria of the election results, the economic reality facing the Indian government seems to be setting in. A key challenge facing the country's leadership will be meeting the deficit target since direct tax collections for the year likely to be inadequate. Raising more money from local markets is also a challenge with government debt already in excess supply. Handling a stressed rural economy will be another challenge with late monsoon this year likely to affect India's agrarian economy. Income support to farmers has also been impacted by the elections. Put together, these factors are likely to cause further slowdown in a critical sector of the economy. Additionally, shock to the oil prices from rising tension between the US and Iran is likely to add strain to a government already under pressure from rising unemployment and a sluggish economy.

The exit of Viral Acharya on 24 June marked the third departure from a key post at the Indian central bank.  Expectations of a replacement with dovish views strengthened the rupee on the day, despite the news of his resignation causing concern. The Reserve Bank of India's (RBI's) interventions in the rupee market have kept the rates low at the short end of the curve. However, the implied yields on the rupee forwards for tenor longer than a year seem to be rising despite a dovish bent to the policy.

There have been reports previously that the government wants the RBI to transfer surplus reserves to the government helping it shore up the balance sheet and reduce the outstanding sovereign debt. Some analysts have estimated that this could transfer up to 3 trillion rupees to the government. However, RBI officials have been keen on retaining the cash as a buffer against fiscal stress often caused by populist government policies. This has been a contentious (and publicly debated) issue between the ministry of finance and the central bank for some time and a committee was setup to look into the issue. In June, reports emerged that the RBI might soon transfer at least part of the surplus back to the government, as recommended by the committee. This market talk added to the momentum in the bond rally, which proved short-lived when further reports emerged that the committee will delay the submission of its report. The unavailability of these funds from RBI will add to the shortfall in government finances giving rise to concerns on the widening fiscal deficit ahead of the new budget. 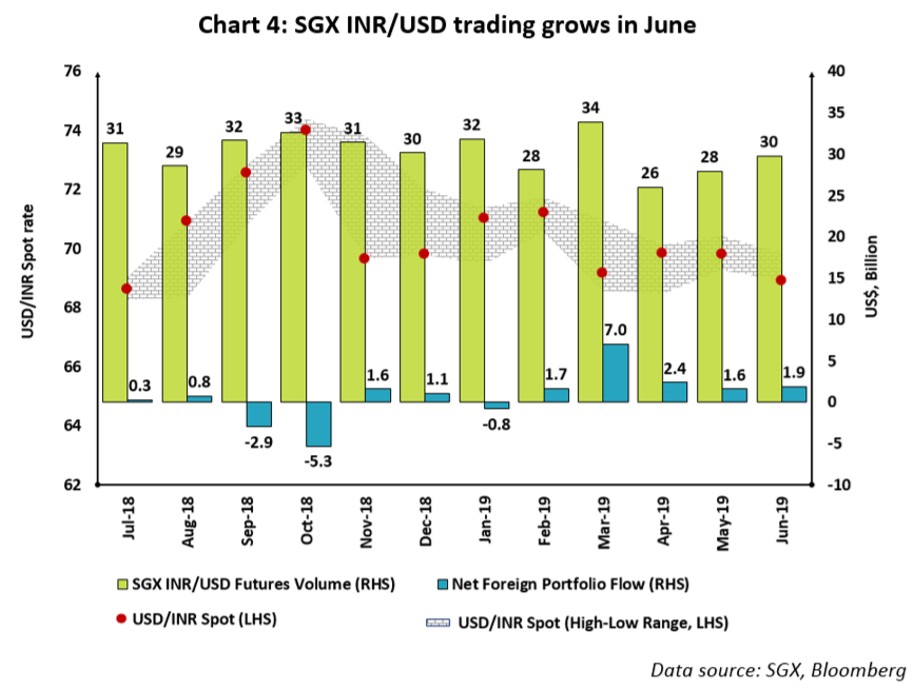 However, Foreign Portfolio Investors (FPI) are continuing to invest in the Indian market. In anticipation of an accommodative policy and rate cuts to counter the sluggish economy, investors routed nearly US$ 1.2 billion to the rupee bond market in June. This rally in the government bonds brought the yields to under 7 percent. The year to date aggregate net inflows exceed US$ 13.8 billion and include US$ 11.2 billion invested in Indian equities in 2019.

The total trading volume for the SGX INR/USD futures was US$ 30 billion (1,034,490 contracts) in June - up 6 % from May 2019. Open interest for the SGX INR/USD futures also increased in recent months, hitting a new record in June of 109,084 contracts (on 26 June) before ending the month at 78,007 contracts. Overall, the open interest for SGX INR/USD Futures is up 160% from December 2018 - a strong indication that the market is moving to SGX to manage risk.

During the last 12 months, market participants have had different reasons to focus on the Korean peninsula. While the results from the semi-conductor industry have always been important to the regional economy, political developments in the region have assumed more significance. The meeting between Trump and Kim are well documented but have failed to produce any result to the nuclear proliferation issue in the region. Given the importance of China to the North Korean economy, and with the US-China trade issues at the forefront, the first visit by a Chinese President to North Korea in almost 14 years brought the political dynamic in the region into focus. After the Osaka summit, Donald Trump met with Kim Jong Un at the DMZ (demilitarized zone) between North and South Korea, making him the first sitting US president to visit the region - moving the region further into the spotlight. 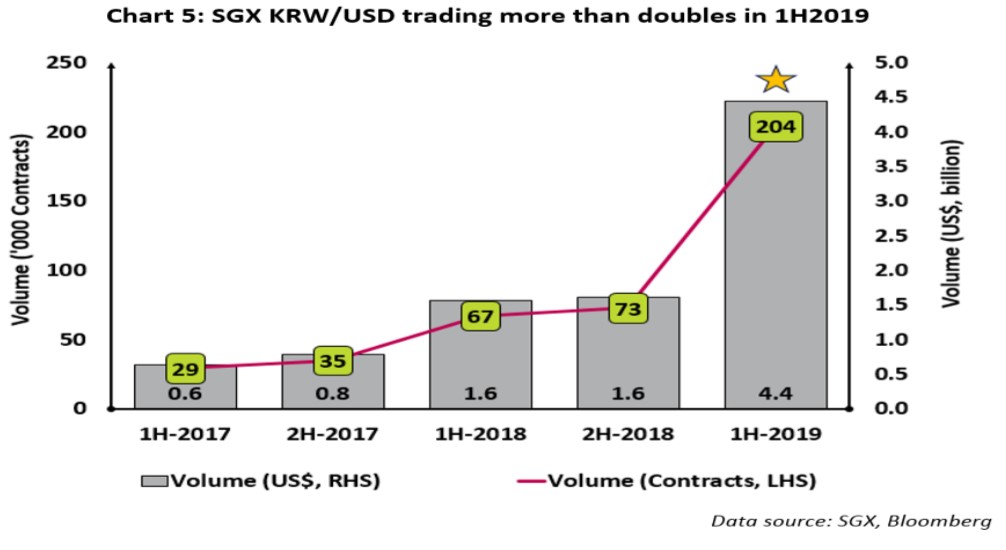 Other FX related developments for SGX in 1H2019: 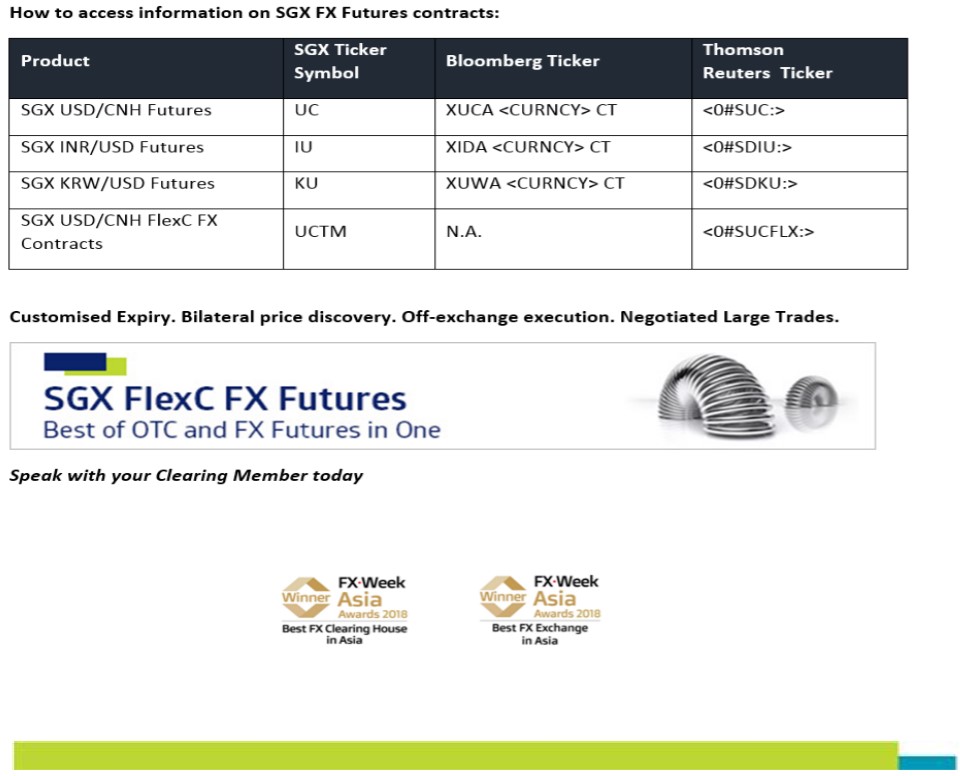 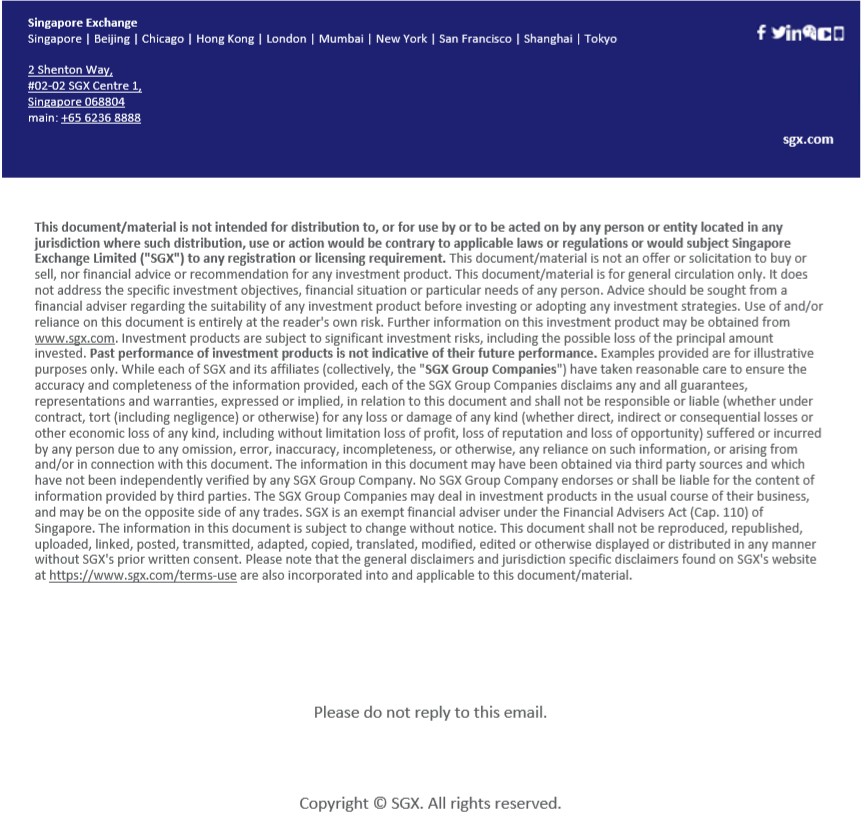