The Market Corner: The Month in Review "Budget and Debt Ceiling"

The US federal government’s fiscal year starts on October 1st and ends on September 30th. Every year the government needs a budget where tax revenues and expenses are named and properly addressed.

Expenses can be divided in two categories: mandatory and discretionary. Mandatory expenses are dictated by laws (e.g. agricultural subsidies, Medicare, Social Security). Discretionary expenses on the other hand need a bill to be allocated (e.g. natural disasters, emergencies). Whenever the expenses exceed revenues there is a deficit, and that is when normally the topic gets plenty of attention in the political debate. Deficits are rolled into public debt and financed in the fixed income markets, where investors loan money to the government in exchange for interest payments. 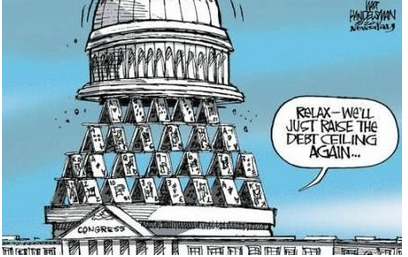 The issue of public deficits starts with a philosophical question. We all agree that regular folks should not systematically spend more than they earn, aside from noticeable exceptions like getting a mortgage that allows smoothing out over time an exceptionally large expense, but should the government be held to the same standard? There are a number of situations that might be considered exceptional like wars, natural disasters or new infrastructure, but also recessions, high unemployment, and in certain countries draught and famine. “Exceptional circumstances” are more ordinary for the public sector than for most individuals. That is when debt comes into play. Issuing debt allows the public sector to smooth out spending over time whenever it exceeds tax revenues. Discussing all the theory around public finances is a much more ambitious goal than the task at hand, but it is worth emphasizing that over the years economic literature and research have analyzed many different cases and conditions under which debt is sustainable and made some important distinctions, in terms of impacts on consumers’ and markets’ expectations, between temporary and permanent variations. One aspect worth mentioning is that individuals and governments access market differently. Government bonds are auctioned to the public and then repriced and exchanged on the secondary markets. Individuals on the other hand are generally price takers and are charged the interest associated with the credit worthiness level they are perceived to belong to. Eventually a lot of those seemingly simple transactions are bundled and turned into complex products, but that happens after loans are issued to individuals and involves other market actors.

The debt ceiling is the maximum amount of debt that the government is allowed to take on every year. Hitting the ceiling would make unlawful any payment that is not directly funded by tax revenues. In a scenario, like now, where a country has outstanding debt, makes interest payments, and has a deficit for the current year, the total liabilities for the following year are expected to get bigger possibly requiring issuing more debt unless a substantial surplus is realized (e.g. the economy starts growing much faster than anticipated and tax revenues spike). So it basically means that the government cannot spend anymore.

As fall approaches the deficit and debt ceiling will be the main focus of the political agenda. The first concern is that hitting the debt ceiling will halt interest payments from the federal government. That is equivalent to a default, and would trigger an immediate downgrade of the US debt with investors demanding a much higher yield to hold that debt. That in turn will be received by the markets as a signal that new taxes and emergency measures might be on the way and could trigger an equities selloff, particularly now when everybody has been waiting for tax cuts. So far things have been fairly quiet as everyone believes a solution will be found in time but in the meantime credit default swaps (CDS) on US debt, the cost insuring against a default, have jumped higher in recent weeks.

The debt ceiling will be the fighting ground to address the bigger issue of deficit, which revolves around not only how much money the government should spend but also on what. Building a wall on the southern border? Cutting taxes? A single payer healthcare system?  None of the above? Different people will have different answers, but failing to address the debt ceiling problem might trigger market volatility and have long lasting consequences on the ability to manage financing for the public sector. More resources would be tied into serving the outstanding debt, even in the unlikely scenario where no new obligations were issued, eventually limiting the government’s long term ability to set its own agenda.

Congress will reconvene on September 5th after their summer recess. Speculations on what comes next on the agenda have been raging for a while now, but with less than four weeks before the end of the fiscal year and plenty of different views within the majority, tackling the debt ceiling is expected to be the priority. Things are further complicated by the fact that congress and the president do not always seem to agree. The FED is also meeting on the 19th-20th and while the odds of rates going higher in September have diminished during the summer, whether a third hike will happen before the end of the year is still very much a possibility.

Letter from the Co-CEO, Lynette Lim "Too Little Sun and too Much Rain"

The Market Corner: The Month in Review "Budget and Debt Ceiling

HKEX: Primary Equity Connect – the next step in the mutual market program?