Letter from the Co-CEO: The Urgent Need to Declutter to Remain Sane by Lynette Lim 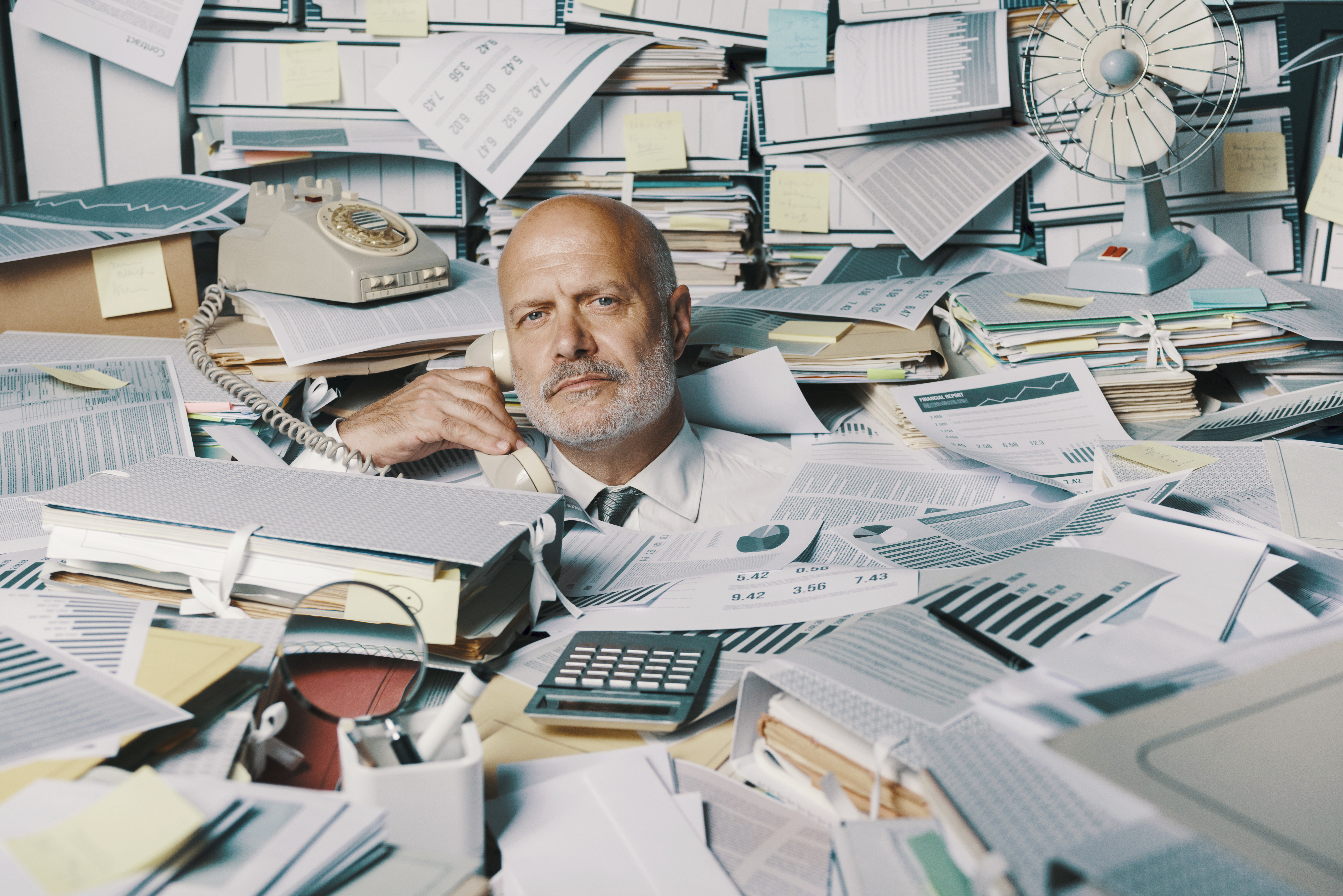 In the last few years, I have found myself deliberately blocking any news feeds and media on my personal devices and computer.  Even on my Uber rides, I would tell the driver to turn the radio off.  The reason?  I find the constant barrage of news analogous to a nuclear attack on my senses.  The news, however short, distracts me from my train of thought and whatever I was supposed to be doing.  Furthermore, it makes me more stressed than I already am.  And like many of you, I have multiple roles to fill - mother, daughter, boss, friend, etc.  I certainly don’t need more stress; I have plenty of it already to fill my day.

I know there is a FOMO (fear of missing out) feeling in all of us, the sense that if we don’t tune in to the latest we’ll miss out on something.  Being in the capital markets business, where money is literally our business, we are in the center of this bombardment of stock news and information.  Of course, some news, like what happened to GameStop stock, makes us, the clearing firms, sit up and take some risk actions.  But really, what is it that we are missing out on?  And what is the tradeoff for having my attention taken from me at that moment?

Unfortunately, media companies and social media platforms are still businesses and are thus driven by profit.  To get more eyeballs and viewership is to increase profitability for these companies.  The winning strategy is thus promoting content that sells and tantalizes, that creates a reaction, in order to spread and increase views.  These platforms never set out to be “moral.”  The term “fake news,” as popularized by a recent U.S. ex-president, also shows the belief of our times that no news is truly trustable.  We have to discern.

So instead of watching the news, I have turned to watching stand-up comics.  Stand-up comics, like ancient jesters in front of the king, seem like the only ones who are truly able to tell the truth as it is.  They can insult something openly without being censored or stopped or accused of microaggressions.  They are driven to make one laugh, which is the same as my goal: to laugh.  Stand-up comics can point us to the ugliest part of humankind, parts of ourselves that we want to hide.  And what is humor?  What is considered funny?  Something is described as funny when what happens doesn’t make sense and is just so incongruent that we have no other response but to laugh.

Last weekend, I witnessed something funny.  In fact, I was part of the comedy.   We were in our car dropping off some stuff at Goodwill. (For readers who are not from the U.S., Goodwill is a charity organization that operates thrift stores around the country.)  It had been snowing the night before, and so the roads were icy and wet.  There were two lines at the entrance to the store.  One line was a line of cars piled up full of stuff - they were all waiting to drop off their donations and get the goods off their hands.  The people in the cars looked a little shell shocked at how many cars there were.  Having lived in Asia for a long time and so being used to crowds, I instinctively grabbed the last bin available and pushed it near the car to drop off our items.  You could see the joy on people’s faces (including mine) as we unburdened ourselves of the stuff that we had accumulated and were now giving away to a good cause.  There was a collective face of relief.  In my imagination, I heard the sound of applause every time I triumphantly threw something into the bin.  I felt like Christian in Pilgrim’s Progress when I was finally at the “place of deliverance” and could set down all my burdens.  I felt free and light.  I gave my fellow pilgrims a nod of acknowledgement; with our eyes we were saying to each other, “Good job!  You did it!”

The other line was a human line, with people queueing all the way to the corner of the street - half a block.  What was the human line for?  As my eyes followed the line up to its start, I saw that it was to enter the Goodwill store!  They were going to Goodwill to buy the stuff the car line was giving away, the exact opposite!

I watched them carefully, expecting them to look miserable.  After all, they were going to be receiving the burden that we tried so hard to get rid of.  But it was in fact quite the opposite.  They looked happy and excited!  They were not angry, not burdened.  They looked like the same lines I see queueing for the roller coaster ride at Six Flags: full of anticipation and excitement for the ride, expecting great finds and great bargains.  There were also people from all walks of life.  I spotted a guy in the line with his Moncler jacket.  Perhaps he was hoping to find another one at Goodwill?

The whole scene reminded me somehow of the famous Botticelli painting La Carte de l’Enfer (“The Map of Hell”), one of his illustrations for Dante’s Divine Comedy, in which we as humans all seem to be marching along this road to hell no matter what we do, unless God helps us.  I’ve also started to wonder if we, the ones who have unburdened ourselves from the stuff we accumulated, are really happier.  Or are we stuck in this rut of accumulating and then getting rid of and then going through the cycle all over again? 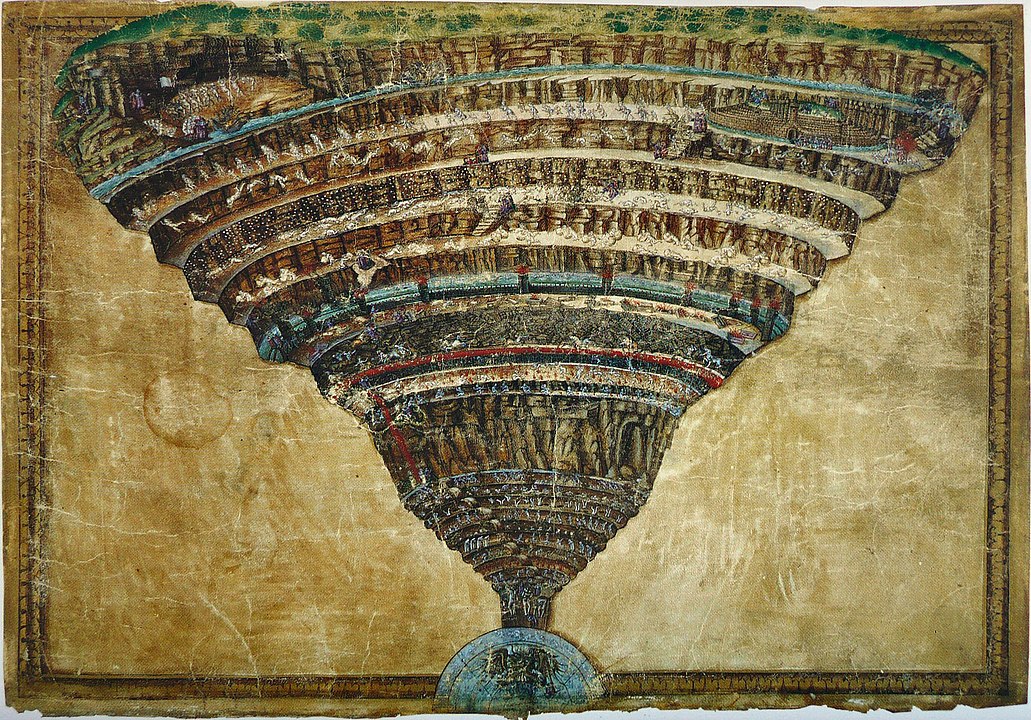 Reading the book Curation: the Power of Selection in a World of Excess by Michael Bhaskar and other books like Indistractable, it is clear that one of the dire consequences of the shift from the industrial age to the information age is that, due to the increase in production of goods and information, we are also living in the age of excess.   And having excess leads to overload.  If we are not careful and deliberate with how we live our lives, what we buy, what we consume both mentally and physically, we become similar to the zombie-like people in the Pixar film WALL-E, where we eat and watch TV all day and stop interacting with one another.  If we do not very deliberately “curate” or purposefully choose what to do and what not to do, we will be overwhelmed and not thrive as humans.

To counteract this age of overwhelm and accumulation, there has been a movement in the form of a petite Japanese woman: Kondo Marie, whose sole business is to get rid of things that don’t “spark joy” in your house.  There are other similar movements towards sustainability and careful living, such as the phenomena of “tiny houses” and minimalism, which essentially teach one to be happy with less.

Those who know me well enough know that I will NEVER win the prize for having the neatest desk.  In fact, many years ago, my direct reports surprised me by cleaning out my desk during a period when I was on leave!  My grandfather came to Singapore from China with nothing, and in me there is still an instinctive fear of scarcity.  Growing up, my own mother followed a philosophy of “just in case,” so she used to buy us two copies of our textbooks, just in case we lost one of them.  In Chinese culture, we equate happiness with having abundance.  So without thinking, the luxury of having more, having extra, is deeply ingrained in us as good.

But now, when we can so easily buy anything from Amazon with next-day shipping, scarcity is no longer a problem.  Abundance is.  Having too much distracts us from enjoying and truly appreciating the things that we do have. (For one thing, we can’t find them!) 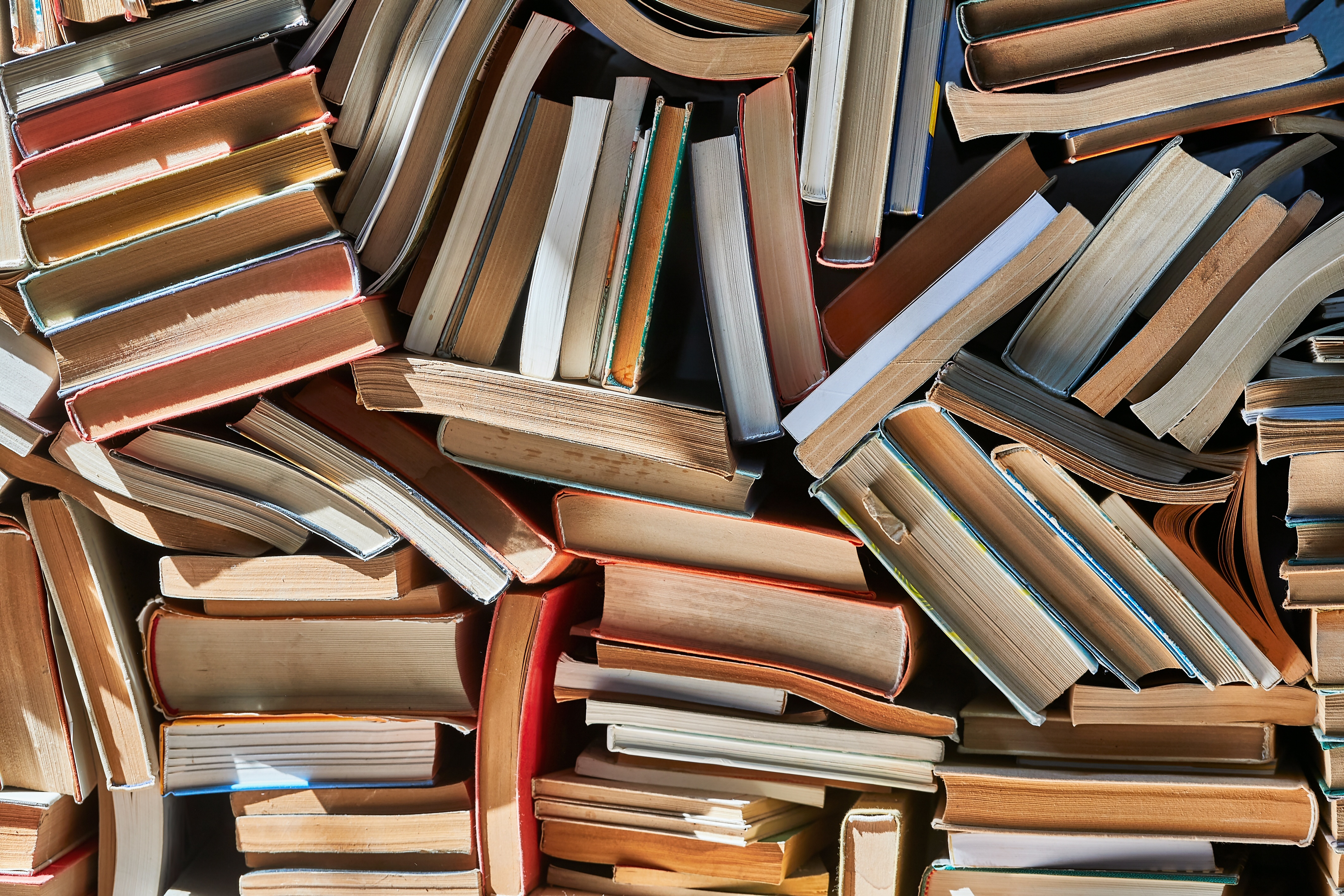 Here are some observations that I would like to share with you, the reader, in case you are also embarking on this process or are in the middle of it.

It is not easy to go from the “accumulate” mentality to somewhat of a “shedding” mentality.  So give yourself lots of grace and compassion for the change.  Those like me, who suffer from what economists call loss aversion, will find it harder letting go.

This is not a one-time affair, but a reiterative process of shedding and cleaning out.

I discovered that once I embarked on this journey, letting go became easier.  It just takes the first step.

Even though the things we own are inanimate objects, we do attach emotional memories and feelings to them, some good and some bad.  I love the old, battered piano we have in our house because my husband bought it for me on my birthday.  I hate the dress I bought years ago because I am not able to fit into it, and I feel ashamed whenever I see it.  Why not get rid of things that makes us feel bad?  Out of sight, out of mind. 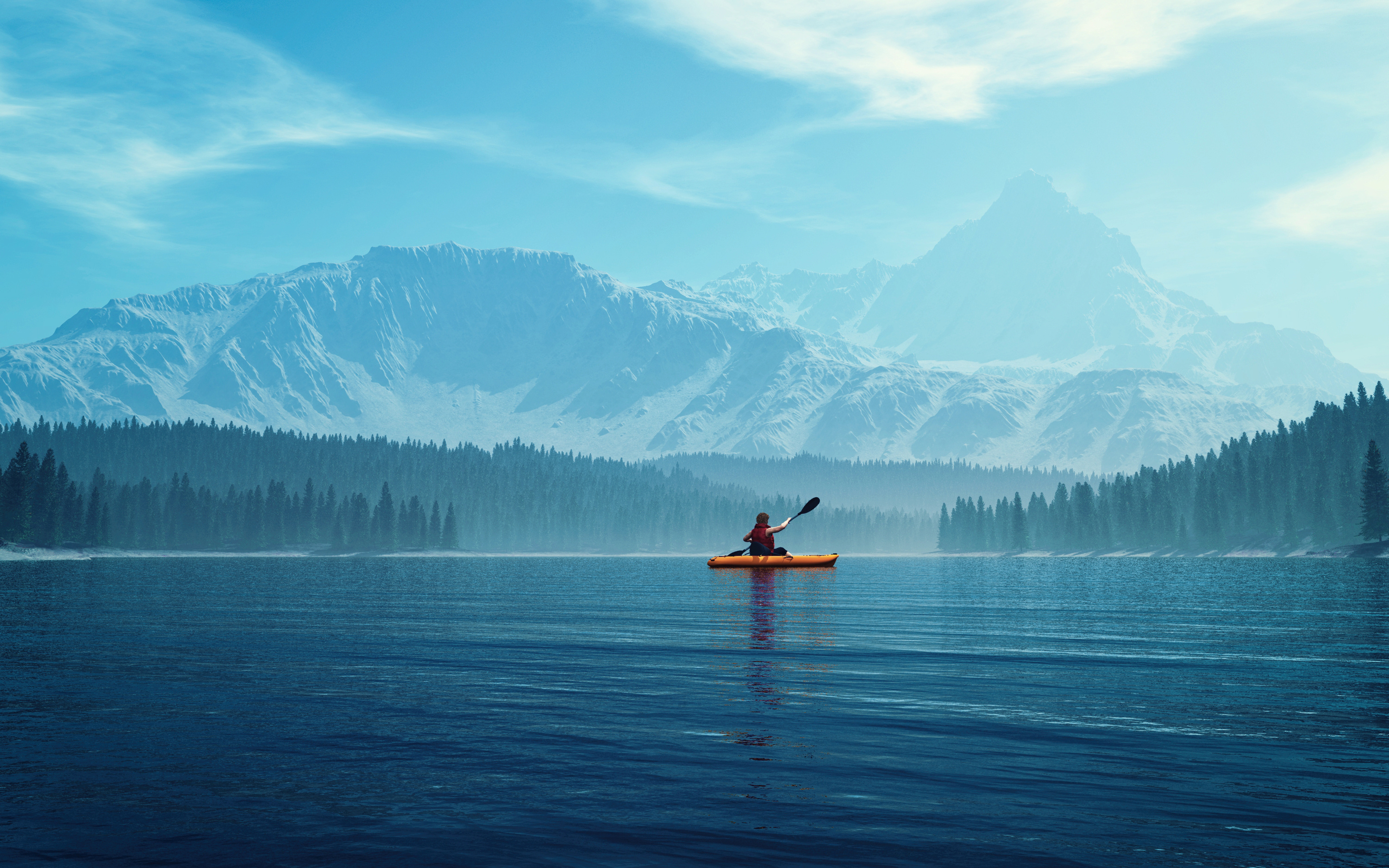 Decluttering and curating, as one will soon realize, is not limited to physical things, but includes the realm of what information we allow ourselves to be exposed to.  It also extends to what we choose to do with our time and who is in our social circle.  Essentially, it helps us zero in on what we choose to put our attention towards.  At work, it also helps me to work towards our OKRs (Objectives and Key Results) because now I have created the space, the mental bandwidth to tackle them.

But as I mentioned, it is also a scary process, because once you remove the barriers to success and living the life you want, you no longer have these excuses in hand to not achieve them.  What if you were wrong to believe in this?  Or your life goal?  That is kind of where I am at right now, facing my fears.  I do it anyway.

I encourage you to take the first step, too.