What is lost can be also your gain- lessons from Cambodia

On a recent trip to Singapore for my brother’s wedding, we decided to stop over in Cambodia to visit our Phillip operations and explore the country. It was Cameron’s first visit to Cambodia and my second. I had travelled to Cambodia-  Phnom Penh as well as Siem Reap in 2000 on a low budget, backpacking trip with three other friends to visit Vietnam, Laos and Cambodia.  I was curious to see the changes and upward progress of the country.

And oh my, how the economy has progressed! 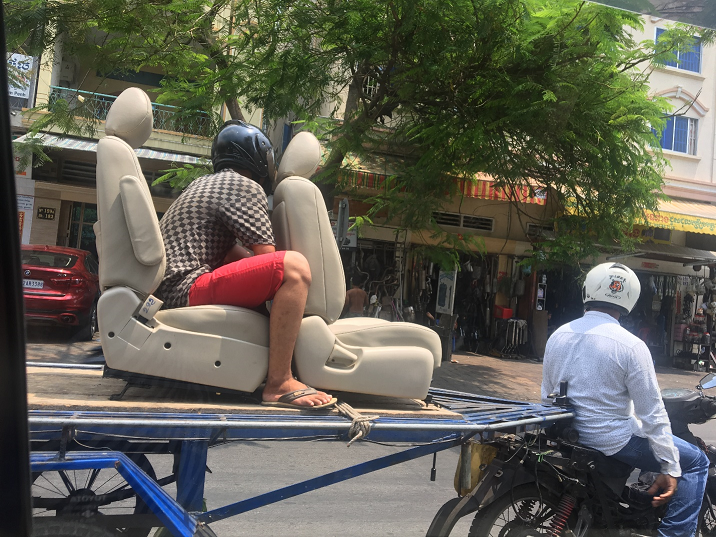 At least he is using a helmet.

On my first trip, to Cambodia 20 years ago, there were very few real roads.  There were dirt roads surrounded by paddy fields. Public transportations consisted of a few taxis and the mini tuk-tuks. Now buildings are bountiful, and you can order a tuk-tuk via your phone.  There is still no Subway trains which cause massive traffic jams everywhere.  I remembered when I stayed at the OMF headquarters then (a Christian missionary organization), they warned me that the numbering on the houses or buildings were not sequential like most places, but rather the order in which the house/building was built. If you lived in no. 3 Main Road, your house was the third house to be built. Even today, the company driver who brought us around, does not know how to read maps or addresses, but rather goes by landmarks (e.g., the building next to the temple and big tree).

I saw a KFC, but still no McDonald’s (an early indication of western world influence). There is only one main shopping mall, but many are being built--one will have a McDonald’s. Previously, maimed beggars young and old filled the streets, but today there are no more beggars. I still see a small amount of litter, but it’s generally clean. In fact, unlike places such as Indonesia where you can see young men loitering around without any jobs, everyone seemed to be busy working.

So what business does Phillip Capital do in Cambodia? Here in Cambodia, we provide microfinancing as well as banking (https://www.phillipbank.com.kh/phillip-bank-plc/) and will soon be starting out the insurance business. While some would say that the banking and lending business is different from the brokerage business in Singapore and Chicago, as a Cambodia operation serves the lowest segment of the market, our motto of being your partners in finance is still unchanged. To give you an idea of the business, the deposits from the bank starts as low as $10 for a child’s savings account with the minimum maintenance of $1. If you are interested in opening an account, you could also enter a raffle to win a motorcycle. (By the way, interest rates for a US dollar account is around 6%.  Let me know if you are interested.)

Here is a picture of our Phillip Bank building. 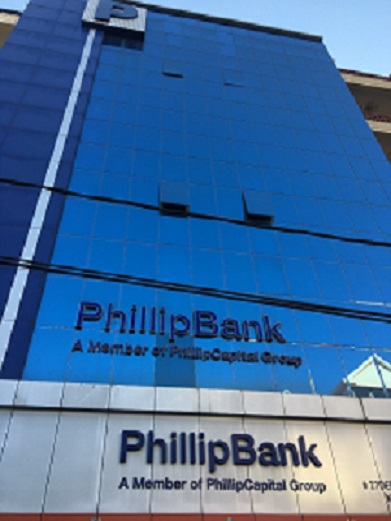 We managed to go to the branch just before closing time. 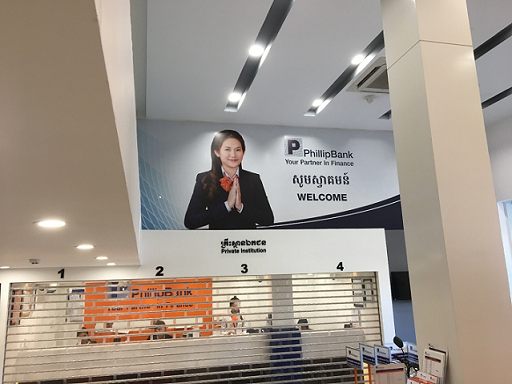 What struck me the most about Cambodia is how happy the people are. Everyone we met (except for the customs officer at the airport) greeted us and each other with a smile. In America, the only time I see people smiling or laughing at strangers is at a game or having drinks at a pub  or watching a comedy. Smiling is not a national sport in the US, unlike countries like Cambodia or Thailand. It is hardly comprehensible that the nation that had gone through the Khmer Rouge genocide 40 years ago, --when it was estimated that 1.7 million people were killed in four years,--not only survived the ordeal but triumphed with such spirit of willingness, survival and zest for life!

I’m currently reading Malcom Gladwell’s book – David and Goliath: Underdogs, Misfits and the Art of Battling Giants (https://en.wikipedia.org/wiki/David_and_Goliath_(book)), a rather confusing but ambitious book that provides lots of interesting anecdotes to prove a point that underdogs have inherent advantages over the giants of this world.  And what seems to be our disadvantageous or misfortune at that time, can only make you stronger in the future and beat the odds.

While I am by no means advocating calamity to befall you or me, the fact is we humans are very resilient and able to bounce back in spite of various hardships.  The book gave an example of World War II, when the British government built psychiatric hospitals in anticipation of the numerous civilians who would face trauma due to bombings. Instead, the psychiatric hospitals were left vacant, as the civilians grew braver and fought to help end the War.

It sometimes seems the fear of something is greater that the fear itself. Once we actually confront our fears and allow ourselves to experience the bad thing, the fear subsides and we can move on. So perhaps for the Cambodians this sense of gratefulness and zest for living stems from what the earlier generation had suffered and lost, allowing the current generation to be more appreciative for what they have and the vast opportunities currently available to them.

We have a thing or two to learn from Cambodians.

So let me ask you something…what loss have you experienced? and what have you gained from your loss? . If you reflect, maybe you will figure out while you have suffered from the loss, you have also gained something.