Trade tariffs, a breakthrough (of sorts) in the Brexit talks and data privacy issues at Facebook that impacted the technology sector were some of the newsworthy events in March that sustained some periodic upticks in volatility. Fears of an extended trade war between the US and China were key to driving market activity during the month, and helped pushed SGX FX futures over a million contracts [1,009,012 contracts] for the third month in a row. The aggregate FX futures volume for Q1 2018 topped 3.6 million contracts and grew 89% y-o-y. 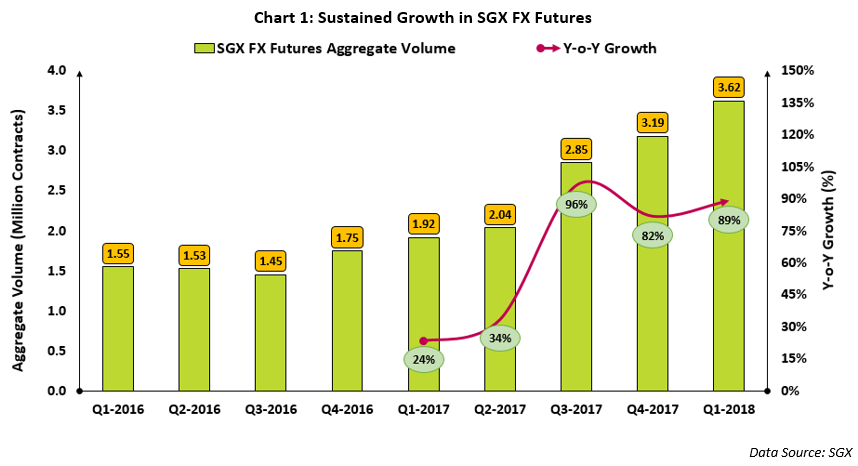 In the first half of the month, the Chinese parliament convened to make several key announcements including extension of term for the current President and the appointment of a new governor for the central bank. With the markets on a "watch and wait" mode during this period, the Renminbi remained relatively subdued and range bound, and the volatilities came off the highs seen in February. The Renminbi weakened to its lowest level in the month [6.3451] on 9 March, the morning after the US announced tariffs on the import of several commodities. However, by the end of the following week, it had strengthened to 6.3141, in a show of the underlying strength.

The US Federal Reserve announced another rate hike on 21 March that led to a weakening of the US dollar. On 22 March, the US introduced tariffs on over US$ 60 billion of Chinese imports that sent the equity markets into action. The Dow Jones index fell 742 points on the day in one of its worst days on record. The next morning when trading resumed in Asia, all Asian equity indices fell. While this did not significantly impact the Renminbi on the day, daily trading on the SGX USD/CNH Futures crossed US$ 2 billion per day on the next three consecutive days for the first time ever. Further assisted by weakness in the global markets, trading on 29 March again crossed US$ 2 billion, before slowing down ahead of the long Easter weekend. 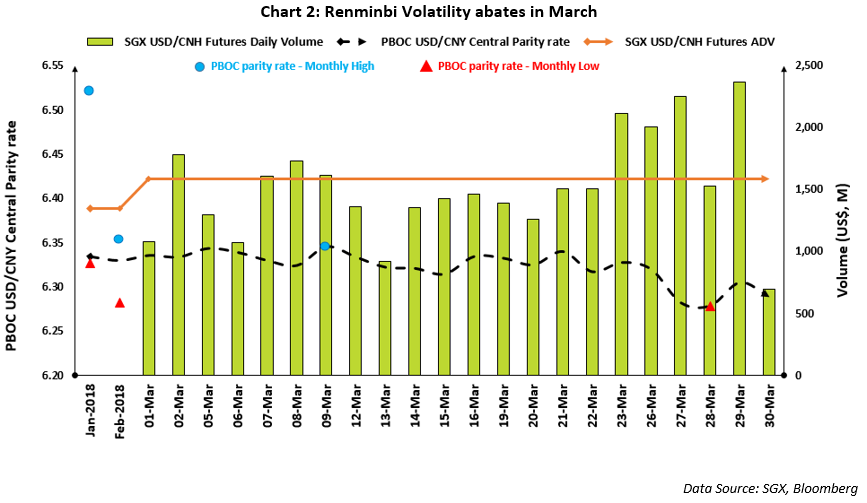 On 27 March, the Renminbi strengthened to 6.2816 (the biggest daily change in March), a day after China launched its own oil futures contracts denominated in Renminbi. As the world's largest importer of oil, China is looking to link its oil contracts to a liquid benchmark at home. The move could also aid efforts to internationalise the currency by gradually encouraging Renminbi adoption among the oil producing countries. The Renminbi further strengthened to 6.2785 on 28 March, a level not reached since end of 2015.

The SGX USD/CNH futures have seen a strong pick-up in trading activity since the Chinese New Year. Since 22 February, trading missed the US$ 1 billion mark on just 2 days. We have seen 13 successive days of trading in excess of US$ 1 billion and 7 successive days of trading above US$ 1.5 billion - the longest stretches since inception of the contract in late 2014. The Average Daily Volume (ADV) for the SGX USD/CNH futures contract exceeded US$ 1.5 billion in March while the aggregate monthly volume [333,353 contracts] crossed US$ 33 billion for the first time. In extending the strong start to this year, SGX has already cleared over US$ 87 billion worth of the contract in Q1 CY2018. This represents an increase of 192% from the corresponding period in 2017 and q-o-q increase of over 35%.

Overall, trading in SGX USD/CNH futures contract crossed the US$ 1 billion mark on 20 days in the month. SGX had seen 54 such days in the entire 2017 for the USD/CNH futures contract, a number that has already been matched in Q1 2018, highlighting the robust growth seen at the exchange and the role SGX plays in meeting the strong demand for hedging the market risk associated with the currency. 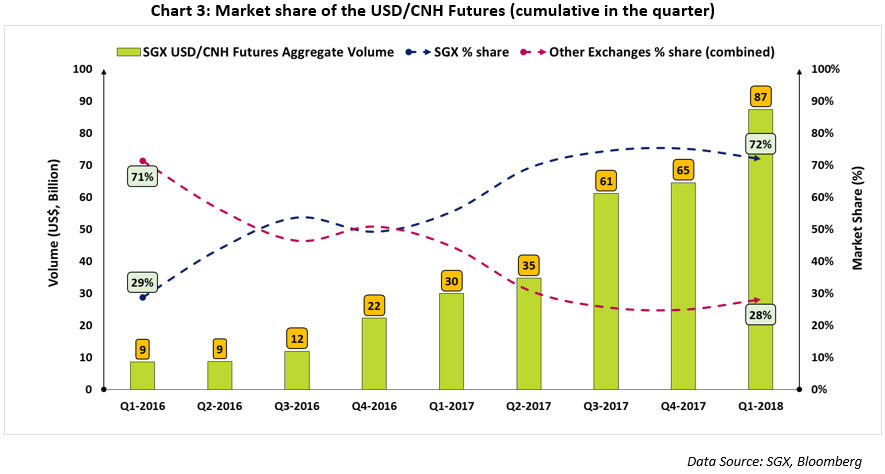 After intense action in January and February, volatility in the Rupee softened in March and INR futures volumes dropped across all exchanges despite a deteriorating global trade environment. A market holiday resulted in a muted start to the month and trading did not subsequently take off. While many traders would have expected lower trading activity, as institutions readied themselves for the closure of financial year in March, a sharp drop of almost 30% - 40% in trading volume across both onshore and offshore exchanges may still have surprised many participants. The RBI set the Rupee benchmark at 65.2261 on the first day of the month and thereafter Rupee largely continued to strengthen, reaching 64.7973 on 27 March, albeit it traded in a much more narrow range than the previous month [RBI fix high-low range of about 43 paisa against a range of 149 paisa in February].

While most Asian currencies strengthened against the US dollar in Q1 2018, given the extended period of dollar weakness, the Rupee has traversed a different road in becoming one of the worst performing currencies in the region this year. Among key Asian currencies, only the Philippine Peso has performed worse than the Rupee so far in 2018. This weakness has been reflected in the global fund allocation in recent months, as foreign funds moved money out of Indian capital markets over the last two months.

The first change to the sedate start of the month came on 14 March, after the RBI decided to discontinue the practice of issuance of Letter of Undertakings / Letter of Comforts for trade credits for imports into India. Effective immediately, this step marks a significant change from the existing practice in trade financing and comes in the wake of the fraud involving India's second largest public sector bank uncovered in February as regulators try to plug the loopholes in the system. While the Rupee initially weakened, it recovered towards the end of the day. Trading in Rupee futures also picked up in an immediate response to the announcement and the SGX INR/USD futures had its best day since the start of the month, with trading volumes in excess of US$ 1.5 billion. However, the activity dropped again subsequently before recovering a bit towards the end of month.

In a recent study, Barclays concluded that the impact of portfolio flows in equity is likely to be a key determinant of the direction Rupee might take in near term since oil prices are on the rise and quotas of fixed income inflows have already reached maximum utilisation levels. However, a worsening outlook on inflation and interest rates have kept the overall sentiments bearish. The returns on benchmark Nifty index are now negative for the year, having erased all gains made in January. Portfolio outflows continued to trouble the Indian capital markets during the first half of March with fixed income being the key to this drag. Net flows from foreign portfolios for the Indian fixed income, a favourite of the EM investors all through 2017, are now negative for the year. Driven by the recent downturn, the valuations for Indian equities have now become better, and they started to attract some flows mid-March. 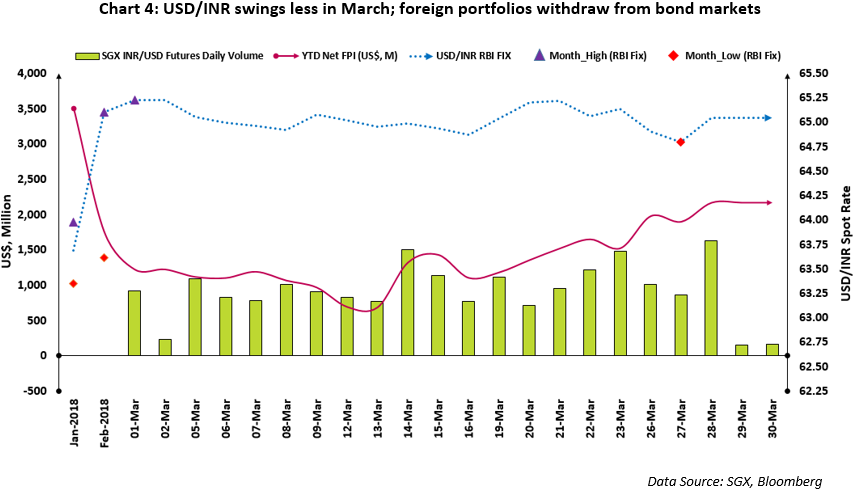 On 16 March, data released by the RBI showed that India's current account deficit for previous quarter (October-December) had widened sharply from a year earlier, triggering a negative sentiment on the condition of the economy. Driven by higher imports, the deficit widened to 2 percent of GDP, or US$ 13.5 billion. This compares to 1.4 percent, or US$ 8 billion, in the corresponding period in 2016.

The Indian government looks likely to embark on an aggressive bond issuance plan to fund its recently announced budget. However, expectations of a steepening interest rate curve have made longer date bonds less appealing to any potential investor that is worried about the mark-to-market losses while the reduced demand has put further upward pressure on the yields for long dated bonds. On 27 March, the Indian government declared that the pace of proposed borrowing would be slower than expected and that they would only tap the market in second half of the year for bulk of the borrowing. The domestic bond market rallied as this immediately pushed the long-term yields down, thereby flattening the yield curve.

The volume for SGX INR/USD futures has grown steadily since its launch 4 years ago, consistently crossing a threshold of US$ 1 billion ADV in the later part of 2017. The trend has continued in 2018, and trading has already crossed US$ 1 billion threshold 43 times in the current year (including 9 days in March despite slow trading during the month). In Q1 2018 alone, nearly 2.7 million contracts exchanged hands as traded notional volume for the SGX INR/USD futures nearly reached US$ 84 billion in the quarter, the highest record thus far, up 76% over the same period in the preceding year ago. 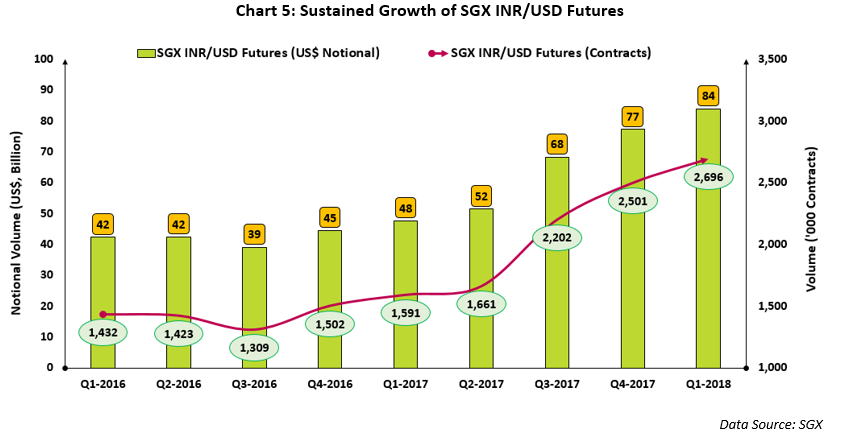 As the world prepares for a meeting between the leaders of the North Korean regime and the US, South Korea has had to agree to new trade terms under the threat of trade tariffs. On the back of the broad macro environment building up in the region, SGX KRW/USD futures had its best month ever in March. The contract has started to see some good momentum in trading in the last few months with 16,415 contracts exchanging hands in March, while trading in the contract in Q1 2018 was up 77% over the preceding quarter.

This is an auto-generated message. Please do not reply to this email.