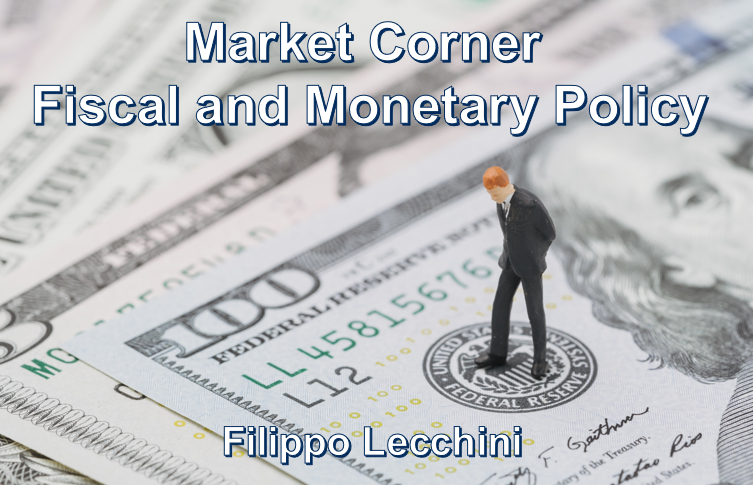 In the traditional approach prevailing in the second part of the 20th century, Fiscal and Monetary Policies were separate tools that could be used to ease or curb the economy depending on the cycles and the circumstances. Fiscal policy is mostly made of three components: the taxes the Government collects, the money the Government spends and the debit that the Government issues when spending exceeds the tax money. Monetary policy is more complex, there are many channels and it keeps evolving, but the traditional instruments are interest rates and money printing.

The conventional wisdom used to be that the Government wants to act in a countercyclical fashion, which is supporting a weak economy and to pull back when growth is strong, and unemployment is low, also because inflation used to be a concern and markets are wary of any attempt to alter assets value in real terms (i.e. inflation adjusted). Political motive comes into play as well, in occasionally incongruent ways with liberals embracing trade and deregulations and conservatives eager to cut taxes but with a questionable record on deficits and debt.

Historically people disagreed on what needed to be done and not so much on the available options, but after the financial crisis, a lot of what used to be “normal” can no longer be taken for granted. For starters, inflation does not rate nearly as high in the priority list. Japan went through a protracted deflation, European sputtering economies have other worries and even the fundamentally healthy U.S. economy does not show signs of runaway prices, despite years of quantitative easing. One might wonder if old paradigms still apply to economies that moved away from manufacturing, need to maintain and improve infrastructure more than build it from scratch, and where workers lacking advanced skills are far more likely to experience unemployment and salary stagnation. If inflation is no longer a concern, what is the role for a tight monetary policy? Should central banks tighten at all? In the U.S., the debate around whether the FED should have stopped raising rates sooner is very actual. One argument remains and pertains to the ability to cut rates when needed: if interest rates are near zero, what’s there to reduce if the economy needs easing? And assuming that cuts in a low rate environment have a meaningful impact, which is an open question in and of itself. One idea that is getting some attention in the media lately is a modern monetary theory (MMT). MMT says that the government, which has a monopolistic control of the currency, can issue debt to fight unemployment or stimulate growth and then print money to fund it. The notion that this approach could be feasible is simply anathema for the economic principles many are used to, some could also find it morally questionable. The response from others would be that the income distribution in our societies is immoral and should be corrected. No matter what people think, there is something mind-blowing about the idea because it fundamentally reminds us that money, as we know it, is just paper with no intrinsic value. It has value for as long as we collectively believe it does. So why not print more of it? But then what would our houses, investments and bank accounts be worth? Hard to say what the new standard looks like, but a couple of things should be kept in mind. There is no guarantee that old problems like inflation and debt crises will not show up again in one way or the other, only time will tell. Secondly, we tend to discuss monetary policy and fiscal policy as if the Government controls both but that is not completely true. Elected officials have authority over fiscal policy, but monetary policy is in the purview of the central banks that act independently of the political power. At least until the political power gets to nominate central bank officials, but even then, control might turn out to be fairly imperfect. The idea that coordination between fiscal and monetary policy would lead to both being more effective is not new though, so at least that has not changed.

After months of being moderately optimistic about a trade deal between the U.S. and China, tariffs are again the driver of recent market action with volatility coming back after a relatively quiet start to the year. An agreement might still be on the horizon but there is plenty of noise around it again. The ratification of the trade deal between Mexico, Canada, and the U.S. is also on deck. As well as trade issues concerning the U.S. and the European Union. Almost halfway through 2019, international trade is the main focus for the markets around the world. Energy markets are also watching cautiously as tensions between the U.S. and Iran seem to be mounting, while OPEC’s action to support oil prices seems to be producing the expected results (i.e. sustaining prices).