Three key segments of the market – Banks, Communication Services and Industrials – make up between two-fifths to half of the market capitalisation of all stocks listed on SGX.

On a market capitalisation-weighted and dividend-inclusive basis, these three Sectors were the best performers in the month of September, with Banks and Industrials amongst the five strongest Sectors over the first nine months of 2018. The comparatively defensive Communication services segment has been amongst the five least performing Sectors over the past nine months.

Among the Bank and Communication Services segments, the comparatively larger stocks that led the Sector higher in September were DBS Group Holdings with a 4.6% total return, and StarHub with a 15.4% total return respectively.

Jardine Matheson Holdings and Jardine Strategic Holdings generated an average decline of 0.7% in September. Together the two conglomerates make up more than half the Industrials Sector’s combined market capitalisation. This meant that the market capitalisation-weighted return of the Industrials Sector was weighed down by these two stocks in September.

The average performances of the 10 current largest capitalised Industrial stocks over recent timeframes are illustrated below.

Institutional Inflow into Industrials Hits a High in September

The five of the 10 largest capitalised Industrials stocks with the lowest beta averaged a 1.4% gain during the month of September.

The five-year beta represents a long term measure of the volatility of the stock compared to the broader market. The higher the beta, the higher the historical comparative volatility. The table below details the relative performances of the 10 largest capitalised Industrials stocks, and is ranked by the highest to the lowest long term beta. To see more details of each of the stocks below in SGX StockFacts click on the stock name. 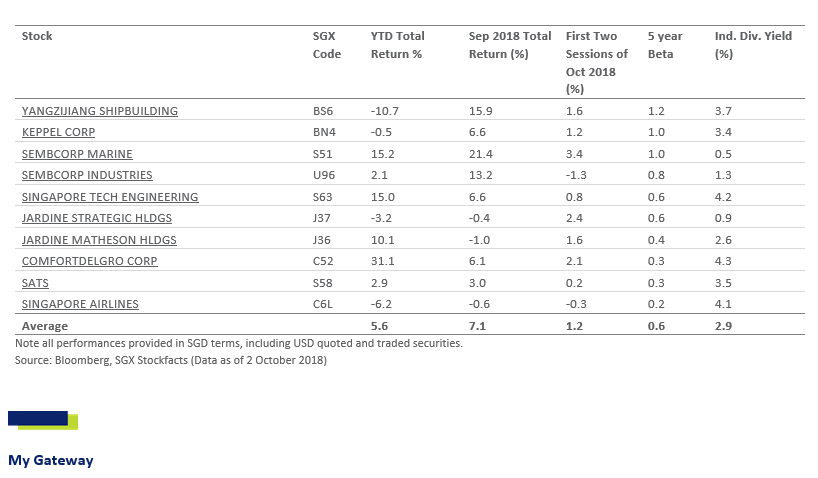