The view expressed by most of the Fed policymakers suggests that the central bank is much closer to lifting rates than the market expects. The implied odds of a June rate increased from nearly zero to 30% on Monday.

A rise in U.S. interest rates would lead to a weaker yen versus the dollar, positively impacting Japanese exporters’ profits. As of 23 May, the yen has depreciated 2.9% month-to-date against the dollar.

Correlation between yen movement and the Nikkei 225 Index has grown more positive since the start of the year. On Monday, 23 May, the 60-day correlation was 46.5%, more than double the year-to-date low of 19.9% which was recorded on 19 January 2016 when the collapse in oil prices roiled global equity markets.

Growing Correlation between the Nikkei 225 Index and USD-JPY Rate

Yen: More Volatile Than Any Other G7 Currency

The yen’s swings are the largest amongst the G7 currencies, namely the euro, U.S. dollar, Canadian dollar, Pound sterling and the Japanese yen. On 13 May, the yen’s 30-day realised volatility reached 15%, its highest level in close to three years. In comparison, the maximum 30-day volatility for the other G7 currencies has not breached 13% this year.

The yen reached an 18-month high of 105.55 yen per dollar on 3 May, which prompted the Japanese Prime Minister Abe’s advisor, Koichi Hamada, to tell officials he would intervene if the yen firmed to between 90-95 per dollar, despite possible upsets from the U.S.. Japanese authorities last intervened in the currency markets in 2011, when they sold yen for dollars to stem a speculative spike in the yen.

The G7 gathering last week highlighted differences between Japanese and U.S. currency policy, with U.S. representatives suggesting that Japan has no justification to intervene in the market to stem yen gains as currency movements remain “orderly”.

The lack of consensus did not stop Japanese Finance Minister Taro Aso from issuing verbal warnings to markets against excessively pushing up the yen. "I told (Lew) that recent currency moves were one-sided and speculative," Aso said in a news conference on Saturday, adding that the yen's gains in the past few weeks have been disorderly.

Fluctuations in the yen price have corresponded to swings in the Japanese equity market, as seen from the elevated implied volatility of the Nikkei 225 Index. For the month up to 23 May, the average implied volatility for Nikkei 225 Index was 24%, higher than the key markets including S&P 500 Index (13%), EuroStoxx 50 Index (22%), Hang Seng Index (19%), KOSPI 200 Index (11%). 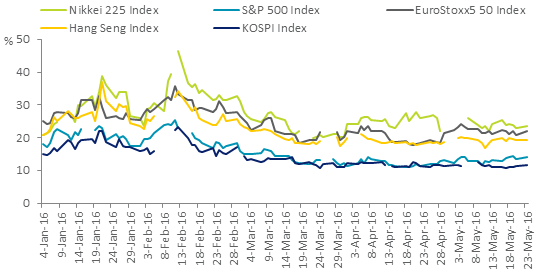 Four months after the Bank of Japan (BOJ) surprised markets by adopting a negative interest rate policy, the verdict is certainly still out on whether the policy will bolster the economy and time may still be needed to see the full market impact.

Japan is not alone in experimenting with the unconventional negative interest rate policy. A number of European central banks have ventured into negative rates territory in the past few years, including Denmark, Switzerland, Sweden and the European Central Bank. The timeline below provides an overview of the trend and motives of these central banks implementing negative rates.

The BOJ held off on expanding monetary stimulus in the March and April meetings as Governor Haruhiko Kuroda opted to take more time to evaluate the impact of negative interest rates on the economy. Policymakers are hoping that by bringing down borrowing costs with the 0.1% negative rate on a portion of bank cash balances at the BOJ, lending will accelerate and boost growth and inflation.

With U.S. Federal Reserve officials talking up the possibility of a June rate increase, the yen and therefore the Nikkei 225 Index may be in for a turbulent summer. Analysts expect that a 1% increase in the U.S. benchmark interest rate would push the dollar into a significant rally.

In addition, SGX’s Japan-related equity derivatives remain available for trading on all Japan holidays, with the exception of New Year’s Day (1 January). Margin discounts on spreads formed with other SGX derivatives allow for greater capital efficiency for investors that has views on multiple Asian markets.

This document is not intended for distribution to, or for use by or to be acted on by any person or entity located in any jurisdiction where such distribution, use or action would be contrary to applicable laws or regulations or would subject SGX to any registration or licensing requirement. This document is not an offer or solicitation to buy or sell, nor financial advice or recommendation for any investment product. This document has been published for general circulation only. It does not address the specific investment objectives, financial situation or particular needs of any person. Advice should be sought from a financial adviser regarding the suitability of any investment product before investing or adopting any investment strategies. Investment products are subject to significant investment risks, including the possible loss of the principal amount invested. Past performance of investment products is not indicative of their future performance. While SGX and its affiliates have taken reasonable care to ensure the accuracy and completeness of the information provided, they will not be liable for any loss or damage of any kind (whether direct, indirect or consequential losses or other economic loss of any kind) suffered due to any omission, error, inaccuracy, incompleteness, or otherwise, any reliance on such information. Neither SGX nor any of its affiliates shall be liable for the content of information provided by third parties. SGX and its affiliates may deal in investment products in the usual course of their business, and may be on the opposite side of any trades. SGX is an exempt financial adviser under the Financial Advisers Act (Cap. 110) of Singapore.  The information in this document is subject to change without notice.