For the first time in five years, China’s foreign exchange reserves dropped below US$3 trillion in January 2017 from a peak of US$3.99 trillion in June 2014. While this was below a psychologically significant level, the decline was the smallest in six months, as tighter capital controls and a stronger RMB helped to slow capital outflows.

On 6 January, the People’s Bank of China (PBoC) strengthened its CNY fixing to 6.8668 against the USD, the largest one-day spike by 0.9% in fixing since 2005. On the same day, the CNH HIBOR Overnight rate rose to 61.3%, the highest level since 12 January 2016. The spread between onshore and offshore RMB widened in January. Participants trading SGX’s USD/CNH futures/option and SGX CNY/USD futures would have been able to capture this move by trading both currency pairs.

The RMB recovered by the later part of January 2017, in line with a broader downward correction in the dollar. This followed the surge in the dollar after Donald Trump’s presidential election win in November 2016 and the Federal Reserve’s interest rate hike in December 2016. The decline in China’s reserves below US$3 trillion may raise market concerns about actions to stabilise the RMB against the dollar. In view of this uncertainty, both onshore and offshore investors with exposure to RMB can look to the usage of efficient currency risk management tools, such as SGX USD/CNH futures/options and SGX CNY/USD futures, to better protect themselves against RMB fluctuations. 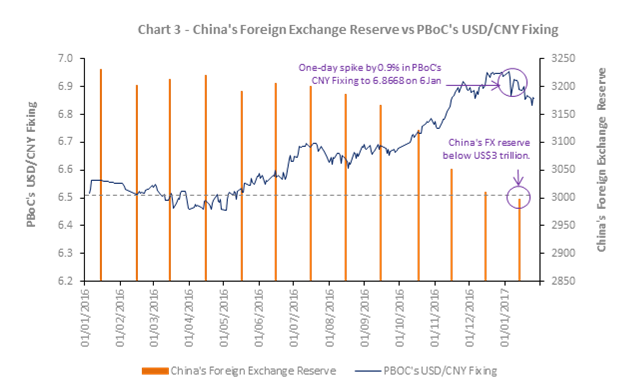 The key contract specifications for SGX USD/CNH Options are as follow:

Parties who are interested to participate in the SGX USD/CNH Options Market Maker or Liquidity Provider programmes may contact their respective SGX Business Managers.